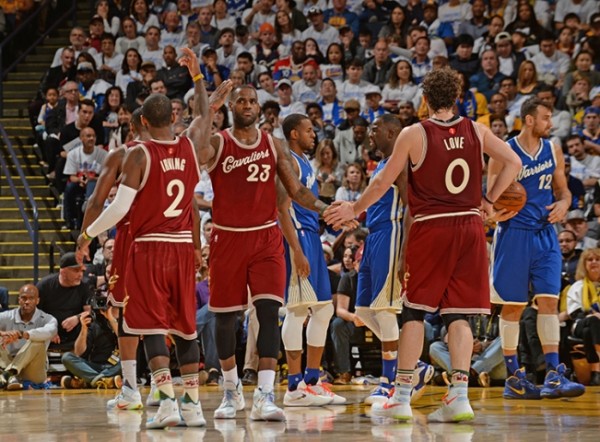 The Cleveland Cavaliers gave the defending champions their toughest game at home this season.

The Golden State Warriors—held to a season-low 89 points and 41 percent from the field—were stifled at Oracle Arena on Christmas Day. Stephen Curry’s three-pointers weren’t falling, Klay Thompson was quiet with a mere 18-point output and bench player Shaun Livingston was arguably the team’s best offensive player.

Entering the game, had someone told you that all of these things would come to fruition, there would be no way the Cavaliers would lose, right?

But here the Cavaliers were yet again on Friday night—trying to provide answers following yet another loss to the Warriors.

After carrying Cleveland in another one of these marquee matchups, LeBron James didn’t have many answers to provide in the postgame locker room, other than noting how well the Cavs’ defense played:

“We gave ourselves a chance. If we play like that defensively, we’re going to be a very tough team to beat. Offensively, we just didn’t have it. No one had it.”

There’s no doubt that the Cavaliers had their finest defensive performance of the season. They held a 28-1 Warriors team to just 45 first-half points and 64 total points at the end of three quarters. Both marks were season lows for the premier offensive team in the league.

James struggled with his shooting while finishing 10-of-26 from the field, but he received zero support from his main running mates.

Kevin Love, who has looked more comfortable in his second season with the team, scored just 10 points on 5-for-16 shooting. In his third game back from injury, Kyrie Irving missed 11 of his 15 shots while contributing just 13 points.

The 31.6 field goal percentage that Cleveland posted for the night was the fourth-worst mark a James-led team has ever posted in his 936 career games played.

“It’s good to have one of those every so often. If our defense shows up, we’re in pretty good shape to win games. We just show our versatility and try to win different ways.”

And there you have it folks. Therein lies the problem—the Warriors are a more versatile team than the Cavaliers right now.

Despite offseason additions in Mo Williams and Richard Jefferson, and improvements in contributions from guys like Love and Matthew Dellavedova, the Cavaliers are still a step behind the Warriors.

The Warriors were stifled offensively and relied largely on Draymond Green and role player Livingston to provide hard-earned points and it didn’t matter, because they found a way to win by playing even stingier defense than what the Cavaliers displayed.

“Tonight our defense was absolutely unbelievable for all 48 minutes. To keep them in the 80s, they never really got in a flow where they could really attack us.”

Outside of a little run during the second quarter when Curry was sidelined for half of the period due to a calf injury, Cleveland never led during the game.

It’s true that the Cavaliers remained within a single-digit deficit of the Warriors for the entire night, save for a few seconds late in the fourth quarter, but why would anyone in Cavaliers Nation be looking for brownie points at this stage?

Cleveland has now lost four consecutive games to the 2015 NBA champions after taking a 2-1 series lead during the 2015 Finals.

We already know the excuses are going to flood in—Cleveland was at Oracle Arena, Irving and Iman Shumpert were still shaking off the rust and it’s “just a regular season game.”

While Irving and Shumpert may have been “shaking off the rust,” the Warriors were still playing without their starting small forward Harrison Barnes. So while the Cavaliers had a fully-healthy lineup, Golden State still defeated Cleveland despite being short-handed.

In fact, outside of the aforementioned second quarter stretch where Curry was sidelined due to his calf injury, there wasn’t a single moment in the game where you felt as if Cleveland was the better team—because at this point, they aren’t.

This isn’t to say the Cavaliers aren’t a great team, because they are. It’s clear that Cleveland is the premier team in the Eastern Conference and will run away with the conference’s first seed barring some major unforeseen collapse.

However, this season isn’t being judged based on whether the Cavaliers can win the Eastern Conference. They’ve done that before, and they’ll do it again. What this whole 2015-16 season revolves around is whether or not the Cavaliers can upend the Warriors to win what is ultimately their goal—an NBA championship.

As we inch closer toward to the end of 2015, one thing became clear on Christmas Day—not much has changed since the culmination of the 2015 NBA Finals.