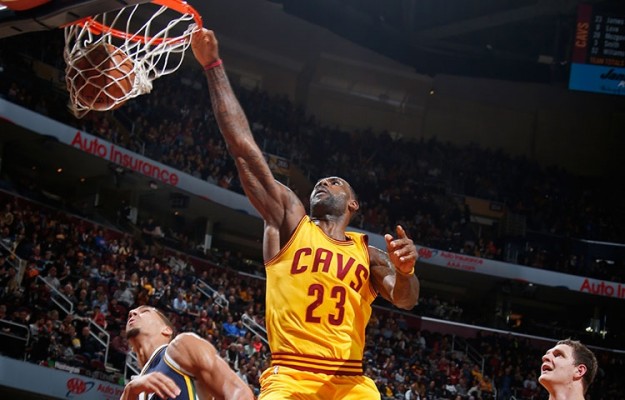 (Cleveland, OH) – LeBron James scored 17 points in the fourth quarter to power the Cleveland Cavaliers to their seventh consecutive victory with a 118-114 comeback win over the Utah Jazz on Tuesday night at Quicken Loans Arena.

James had just 14 points entering the final period, but was the key factor in the team’s comeback from a 95-86 deficit with just over seven minutes remaining. On numerous occasions, he connected for clutch shots, including a hook shot with 49.5 seconds to play that doubled the Cavs’ slim two-point advantage.

Despite Cleveland’s 21-5 run that put them in the lead for good, the feisty Jazz squad refused to surrender. The game was not decided until Mo Williams connected on a pair of free throws with 1.2 seconds remaining.

The trio of James, Williams and Kevin Love combined for 82 points, with the latter two contributing 29 and 22, respectively. James also added eight assists and seven rebounds, while Love tacked on eight boards.

The win was the Cavaliers’ seventh straight and raises their mark to 7-1 on the year. It also completes a four-game sweep of a week-long home stand, while the Jazz drop to 4-3 on the season.

James spoke after the game about his leadership in forging the comeback:

“It’s a huge responsibility, and I try to be there when my guys need me,” James said.

He also spoke about what the comeback said about the team as a whole:

“That we were able to handle adversity,” said James, who then offered a rhetorical question. “Do you hide under the bed or push through the thorns?”

In addition to that trio, Tristan Thompson contributed eight points and seven rebounds, but his three important blocked shots in the final quarter also played an important role in the comeback. He spoke about how that should be standard for a team of the Cavaliers’ stature:

“When your a championship team or a team that wants to be a champion, you have to find a way to win the tough games,” Thompson said.

Cleveland head coach David Blatt explained how James was able to take over the game to lead the team to victory:

“He’s the greatest player in the game,” said Blatt. “There’s probably no one with a higher basketball IQ, and who understands the moment.”

Williams, who was 8-of-9 from the field and 9-of-10 from the free throw line, spoke about James’ performance:

“When we were down, he took it to another level,” Williams said. “It’s what we expect of him.”

The Cavs connected on 10 of their first 13 shots, moving the ball well with eight assists during this stretch, but were getting beaten on the offensive boards as Utah held a 26-14 scoring advantage in the paint during the first two quarters. In addition, turnovers played a key part in keeping the game close, with the Cavs committing 10 during the first half, including four from James. Matthew Dellavedova spoke about the issue just after the half ended:

“We were a bit sloppy at the start, but once we started keeping control of the ball, we started scoring,” said Dellavedova.

Each time the Cavaliers would start to make their move during the first half, the Jazz would answer, which resulted in just a 27-22 advantage after one quarter. By the time the halftime horn sounded, Cleveland held a 52-48 lead.

Following intermission, the Cavs took a 10-point lead before the Jazz charged back with a 14-3 run to take a 76-75 lead. Once the period ended, the teams were deadlocked at 80 apiece, but Utah began the fourth with a 15-6 run that put the Cleveland winning streak in severe peril, leading to James’ heroics.

Another injury scare for the Cavaliers occurred with just under seven minutes left in the third quarter when Love put up a shot near the basket and landed awkwardly, resulting in his being temporarily removed from the game.

“It didn’t feel too great, but I knew it wasn’t serious,” said Love. “I’ll be sore tomorrow, but we have two days off, so I’ll be alright.”

Blatt spoke about the Cavs string of tightly contested games so far this year:

“We knew coming into the season that we’d go through a stretch where we’d have to battle,” Blatt said. “The good thing is that we’re winning games.”

The Cavaliers now begin a road swing that begins Friday night at Madison Square Garden to face the New York Knicks, with tipoff set for just after 7:30 p.m. ET. Last week, the Cavs pulled away late for a 96-86 home victory against this very same Knicks squad.