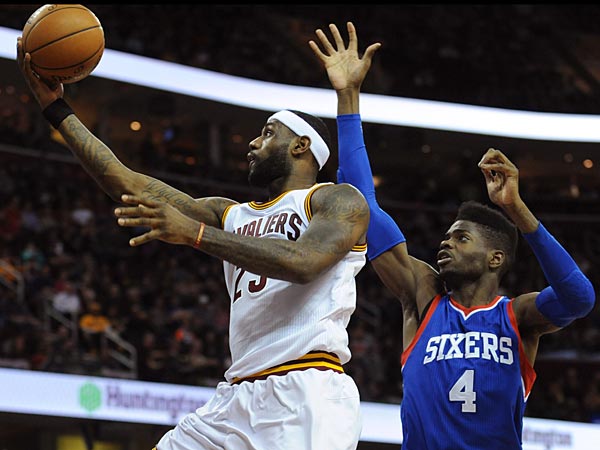 A third consecutive victory won’t be all the Cleveland Cavaliers hope to come away with against the winless Philadelphia 76ers.

LeBron James needs 21 points to become the 20th player in NBA history to reach the 25,000-point mark for his career. With him coming off a 29-point performance Friday night in the Cavs’ 102-92 victory over the Miami Heat, the only thing possibly preventing him from achieving that milestone could be a case of abbreviated playing time if their lead becomes too one-sided too early.

James spoke to the media at Monday’s shootaround in Philadelphia and seemed unaware of being on the verge of joining such elite company:

“I had no idea, first of all, that I’m that close,” he said. “It just means that I’m playing with a lot of great players and a lot of great coaches who allow me to be put in position to be successful on the floor.”

James showed no signs against the Heat of the back problems that limited his availability in training camp and the preseason. He made 13-of-19 field goal attempts in 34 minutes as the Cavs took care of the team, which many are projecting to give them their sternest test in the Eastern Conference this season.

Winning basketball games takes priority with James, who is 214 points away from moving past Jerry West into 19th place on the NBA’s all-time scoring list:

“Obviously the team aspect of it comes first.” he said. “It’s very humbling. It’s a cool thing. I know where I come from, and I know where my family comes from. For me to have milestones along the way … Obviously I’ve got more work to do. But it’s pretty cool when you’re able to just stop and look at it because I don’t get much time to really stop and look at some of the things I’ve done.”

Cavs head coach David Blatt said he is in awe of how James has racked up 6,315 assists in a career dating back to 2003 as much as any of his scoring exploits:

“The most amazing aspect of that is, from the day he came into the league until today, he’s such a willing passer,” he said. “He’s as likely to make as good a play for a teammate as he is scoring the basketball. That just speaks volumes to what greatness you’re talking about.”

The Cavs had 25 assists against the Heat, including a game-high 10 from Matthew Dellavedova, while turning the ball over only 11 times. Kevin Love got into a good rhythm early on and finished with 24 points and 14 rebounds to complement James.

Factor in the 29 assists they had in a 30-point rout of the Memphis Grizzlies, and James believes the Cavs are getting right where they need to be:

“That should be the only way we should play offensively,” he said. “We don’t need to hold the ball. We’ve got so many players who can do multiple things. We’ve got too many guys who can run and get player movement.

“If we don’t move the ball, we won’t be successful. And when everyone has an equal opportunity, it’s fun ball. We’ve got to continue that.”

The 76ers were booed off their home court Friday night in a 99-71 loss to the Utah Jazz. This will be the Cavs’ first look at rookie Jahlil Okafor in a regular-season game, although Joel Embiid remains unavailable to a team coming off its seventh consecutive non-winning year.

James was philosophical about what the Sixers are going through:

“Everyone wants instant oatmeal,” he said. “But there’s always a process. You’ve got to put the time in. You’ve got to build things from the ground up and be serious about making a change. It’ll happen. Hopefully it’ll happen when I’m done, though.”

The Cavs will return to Quicken Loans Arena for four games, including a rematch with the Sixers on Friday night.