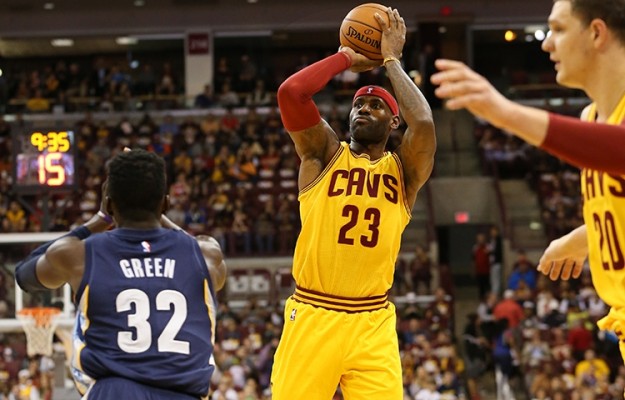 (Columbus, OH) – Despite a spirited fourth quarter comeback that saw them get within a point of the lead, the Cleveland Cavaliers dropped their third straight preseason contest when they lost to the Memphis Grizzlies, 91-81, at the Schottenstein Center on Monday night.

Playing without J.R. Smith and Mo Williams, who both sat out to rest for Tuesday night’s matchup at Quicken Loans Arena, the Cavs ended up having the unique duo of Matthew Dellavedova and Richard Jefferson starting in the backcourt.

LeBron James led the Cavaliers with 14 points in nearly 26 minutes, one of four Cavs to tally double figures, including free agent Jared Cunningham’s 13 on the evening.

The Grizzlies opened the final quarter with a basket to take a 67-55 advantage, but a three-point play and a three from the left corner by James Jones quickly chopped that deficit in half at 67-61. Memphis answered with five straight points, only to see Cleveland charge back to get within a single basket at 74-72 with 6:32 remaining.

The Cavs then sandwiched eight free throws around a three-pointer from Austin Daye during their comeback bid, having a chance to take the lead with just over four minutes left. However, Quinn Cook was unable to drain the three and the Grizzlies answered with an 11-2 run to put the game away.

After the game, Cavaliers’ head coach David Blatt asked what he thought of the preseason thus far:

“We have gotten out of it what we wanted. I’d be happier if we had everybody healthy and playing, but you can’t always get what you want, as they say,” said Blatt.

At the start, the Grizzlies bounced back from an early 9-6 deficit to go on a 13-2 run, but consecutive threes from Jefferson and Joe Harris quickly chopped the margin to a single field goal.

That Memphis run had come as a result of five straight missed shots and a trio of turnovers, but the Grizzlies then closed out the quarter with another 7-2 run, the final three coming on a trey from Vince Carter with less than a second remaining to make it 24-19.

The second quarter saw Cleveland make multiple attempts to chip away at that deficit, only to see Memphis take control of the game again. The first attempt came when the Cavaliers twice got within a point, the last coming after a jumper by Jefferson with 6:37 to go before the half.

However, that score would be the lone field goal over a six-minute span, which allowed the Grizzlies to move ahead by nine at 38-29. Three-pointers by James and Jefferson got the deficit down to three, but Memphis closed out the quarter by scoring seven of the final eight points for a 45-36 halftime advantage.

The second half began with the Cavaliers continuing to struggle, as the Grizzlies led by as many as 14 at 64-50 with 3:13 to go in the third quarter. Five straight points by the Cavaliers got the deficit under double digits, but a free throw by Memphis in the closing second gave them a 65-55 lead with 12 minutes remaining.

Blatt was asked about his lineup decisions during the preseason, and was honest about his process:

Cleveland returns home tomorrow night to play the first of back-to-back home preseason clashes, facing the Milwaukee Bucks in a game set for a tip-off just after 7 p.m. Two nights later, their opponent will be the Indiana Pacers.