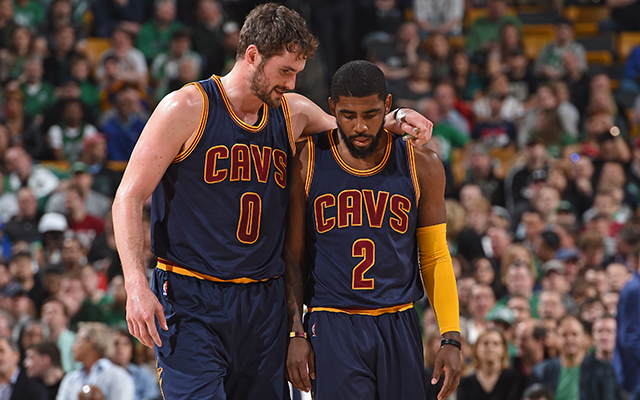 There is still a ton of uncertainty on when exactly Kyrie Irving and Kevin Love will return from injury.

As Terry Pluto of The Plain Dealer reports, the timetable surrounding when Irving and Love will return is not set in stone. In regards to Irving, Pluto states that the 23-year-old point guard will be the last Cleveland Cavaliers player to be ready for the season:

“The player who probably will be the last to be ready for the season is Irving, who had an operation to repair a fractured kneecap. The Cavs don’t have a timetable for his return. There is no reason to rush him back. The Cavs added veteran Mo Williams to play point guard, and they have Dellavedova returning.”

In regards to Love, it was previously reported that the 27-year-old power forward was “on track” to return for the start of the season. However, Pluto reports that the Cavs hope he can be ready for the regular season opener, but that there is no urgency to rush him back:

“Love had major shoulder surgery. It was his left arm, which is a positive. Love is a right-handed shooter. The Cavs hope he can be ready for the season opener, but there is no urgency. They want him healthy when he does return. The Cavs have Thompson and James Jones for depth at power forward. There were times when James played some power forward, although that’s not his favorite position.”

It would make sense for Cleveland to remain patient on both players’ returns. Irving and Love are the best players on the Cavs’ roster outside of LeBron James, and their health is absolutely pivotal if the team truly wants to win a championship.

As solid as the roster is, we saw the result of James being forced to carry Cleveland in the NBA Finals—great individual stats, but a series loss.

Because the 2015-16 Cavaliers team has even more depth than last season’s team, don’t be surprised if it takes awhile for Irving and Love to make their debuts this season.