Don't Miss
Home / Editorials / How Should Kevin Love Be Utilized Next Season?

How Should Kevin Love Be Utilized Next Season? 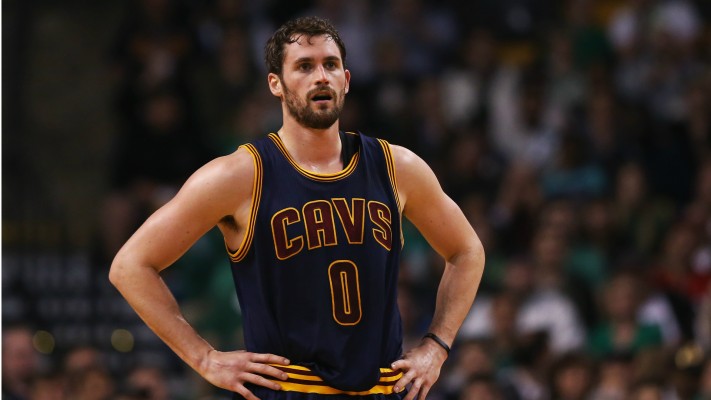 After six seasons with the Minnesota Timberwolves, Kevin Love was universally recognized as one of the top power forwards in the NBA. In that time, the four-time All-Star averaged 19.2 points and 12.2 rebounds per game, as well as being one of the best passing big men in the game.

After the Cleveland Cavaliers acquired the power forward in a blockbuster deal that sent rookie Andrew Wiggins to the Timberwolves, there were many questions as to how the “Big Three” of Kyrie Irving, LeBron James and Love would fit together in Cleveland. Both Irving and James spent their careers primarily as ball-dominant perimeter players. This would be the first time in Love’s career where he was not the primary option on offense.

In addition to making the NBA Finals, the Cavaliers finished the season on a 33-3 run when the team was fully healthy. It can be hard to argue for change with success like that. However, in order for Cleveland to reach their full potential, Love’s unique offensive skill set needs to be utilized to its’ fullest.

This does not mean abandoning what Love did well this past season in Cleveland. His 16.4 PPG was the highest amount registered by any team’s third option. This was in part due to his effectiveness from beyond the arc, so that will need to remain a part of his game.

However, in order for the Cavs to get the most out of Love, he will need to get the ball more in the post. Early in the season, Love explained to the Northeast Ohio Media Group that he’s “always played the game from inside-out.”

A quick look at Love’s shooting statistics over the past two seasons shows that he was much more consistent when getting a heavy dose of looks in the post. His high-post touches per game dropped from 11.9 in 2013-14 to 4.9 this past season. Not only should his totals increase, but the volume should also lead to more consistency as he gets a better flow of the game.

Added touches in the post will also equate to Love fully utilizing his phenomenal court vision. Many have raved about the power forward’s ability to grab a defensive rebound and quickly find a teammate in transition for a fastbreak basket. However, Love’s ability to find teammates in the half-court offense needs to be emphasized as well.

Love averaged 4.4 assists in his last season in Minnesota. This number dropped to 2.2 last season, mainly in part to a decrease in touches in the Cavs’ half-court offense. His assist stats from 2013-14 show that if he gets touches in multiple spots on the floor, he will find open teammates.

Getting Love more looks will require some sacrifice from ball-dominant players such as James and Irving. However, the statistics indicate that if they do run more of the offense through Love, those two will be the recipients of plenty of open looks.

Another way the Cavs can make Love more effective is with different rotations. Offensively, Cleveland thrived when the frontcourt consisted of Love and Tristan Thompson. Having Thompson as the primary backup for the full season to Timofey Mozgov will allow Love to play the vast majority of his minutes at power forward. This will keep him from spending too many minutes at the center position, where he is more of a defensive liability.

The drop off in offensive production without Love was evident in the NBA Finals with the star forward sitting on the sidelines. The Cavs offense stagnated for large chunks of the game. Much of this is due to both Love and Irving being sidelined, but the Cavaliers’ offensive ratings with Love compared to without him points to his absence being the biggest hurdle to overcome.

Head Coach David Blatt’s growing comfort with his rotations should also lead to more time where Love is the only member of the “Big Three” on the floor. Mo Williams should be enough of a scoring threat to be paired with Love along with a trio of strong defenders for segments of games. Lineups like this will certainly allow Love’s usage rate to elevate.

Blatt will also be expected make some changes to offensive sets which equate to more than simply getting Love an extra touch here or there. Many of the Cavaliers had high praises for the coach’s offense before last season. After a difficult start, however, the Cavaliers abandoned that offense and relied heavily on isolation plays from James and Irving.

James recognized this as a problem in the playoffs. Next season the Cavaliers will need a clearer, more well-rounded offensive game plan to avoid media scrutiny if Love appears to be ignored.

Much was publicized over the summer meeting between Love and James. As the two entered into free agency, there was little doubt James would be leaving Ohio. While many in the national media doubted the likelihood of the former UCLA standout signing a long-term deal with the Cavaliers, Love explained to the Players Tribune just why Cleveland was such a great fit.

With a growing level of comfort with his teammates and an apparent high level of trust in the coaching staff and front office, it is clear Love sees the Cavs utilizing him to the fullest. Maximizing his wide range of skills will be a must in order for Cleveland to reach their ultimate goal.