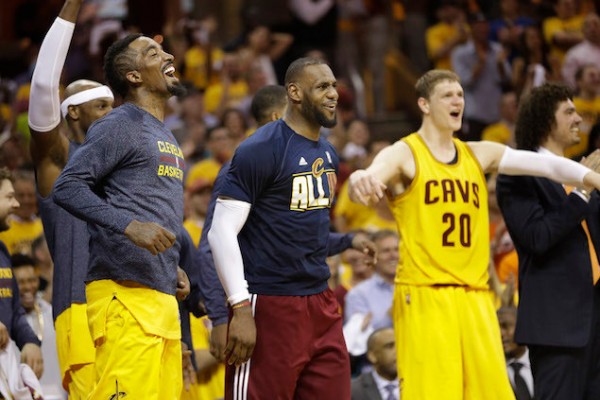 Despite a disappointing ending to the 2014-15 NBA season, the Cleveland Cavaliers in general, and LeBron James in particular, have much to be proud of in the way they were able to continually battle adversity to reach the NBA Finals.

One of James’ main sponsors, Nike, wanted to pay tribute to that effort in an inspirational new ad first mentioned in a tweet by ESPN’s Darren Rovell. The ad offers nine scenarios—eight of which actually took place, then concludes with the phrases, “Except this isn’t Hollywood. It’s Cleveland. Nothing is given. Everything is earned.” Listed below are those scenarios:

Imagine if the team struggled early but finished the regular season strong.

Imagine if their big man went down, but they still found a way to power through the Eastern Conference.

Imagine if they faced the top seed in the Finals.

Imagine if they pushed Game 1 to overtime but lost another star to injury.

Imagine if everyone counted them out.

Imagine if they shocked the world and took the next two games.

Imagine if fatigue caught up with them, and they lost Games 4 and 5.

Imagine if they defied odds, logic and the basketball gods to come back and win the series in 7.

Due to a series of season-ending injuries, James was forced to provide the bulk of the Cavs’ offense against a Golden State Warriors team that was blessed with much greater depth. That effort helped Cleveland win two of the first three games, but Golden State’s depth would turn out to be too much.

James’ efforts were enough to make him a potential candidate for NBA Finals Most Valuable Player, win or lose. However, the award ended up going to the Warriors’ Andre Igoudala.

Even though the Cavaliers came up short, Las Vegas oddsmakers have tabbed them as favorites to win the 2015-16 NBA title. James, who is technically going to be a free agent but isn’t expected to sign elsewhere, is expected to have back in good health the trio of Kyrie Irving, Kevin Love and Anderson Varejao. In addition, the team has a first round selection, and is expected to add a player or two in the free agent market.