Don't Miss
Home / Editorials / Finals Analysis: How The Cleveland Cavaliers Are Competing In Spite Of Injuries

Finals Analysis: How The Cleveland Cavaliers Are Competing In Spite Of Injuries 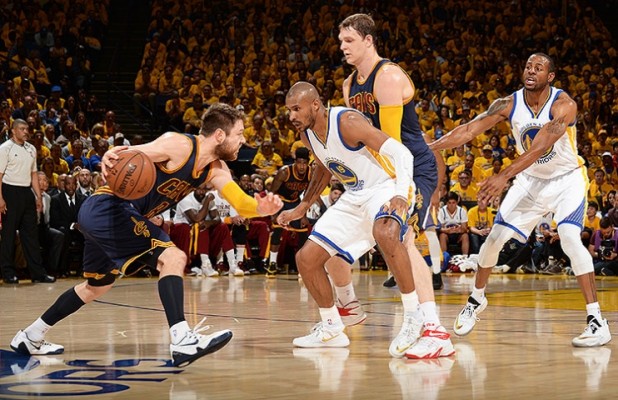 When the Cleveland Cavaliers finally defeated the Golden State Warriors, 95-93, in overtime, there was only one thing left for Cavaliers Nation to do—exhale.

For the second straight game, the Cavs allowed a late lead to slip away, sending the game into overtime. Despite LeBron James‘ 39 points, 16 rebounds and 11 assists, the Warriors erased an 11-point deficit with a little over three minutes remaining after Steph Curry converted on a driving layup to tie the game at 87-all with 7.2 seconds remaining in regulation.

In spite of three bad fouls by J.R. Smith late in the fourth quarter and OT, and yet another blown lead in the extra period, the Cavaliers were finally able to close the door shut on the second game of the series when Iman Shumpert caused Curry to turn the ball over as time expired.

Despite the fact that Cleveland led the entire span from the second quarter until overtime, the win was simply remarkable—the Cavaliers accomplished this in spite of losing Kyrie Irving during Game 1 for the remainder of the series due to a knee injury. This isn’t even mentioning the absence of Kevin Love, who has been out virtually the entire postseason because of an injured shoulder.

So in spite of the injuries and the obvious talent disparity between the two teams, how did the Cavaliers pull it off? How did they lead for the overwhelming majority of the game to win versus a team that went 65-17 during the regular season on their own home court?

For a number of reasons. One has been the play of James and role players such as Timofey Mozgov and Matthew Dellavedova. But more importantly, the key to Game 2’s victory was none other than team defense.

With the exception of the Warriors’ Klay Thompson (34 points), there wasn’t a single player on Golden State who had a good offensive showing in Game 2. The league’s reigning MVP, Curry, had one of the worst games of his professional basketball career. While he did score 19 points and was pivotal in Golden State’s comeback, he was absolutely horrendous for most of the night. Curry was just 5-of-23 from the field and 2-of-15 from beyond the arc.

Outside of Thompson and Curry, Harrison Barnes (11 points) and Draymond Green (10 points) were the only other Warriors in double digits, and their effect on the offensive side of the game was minimal at best. Green did not even record his first field goal until late in the fourth quarter.

The Warrior’s high-octane three-point shooting was a non-factor as the Warriors were just 22 percent from three-point range, going a horrendous 8-for-35. Making matters even more pleasant for Cavaliers Nation was the fact that Golden State shot just 39 percent from the field in general.

James deflected all of the credit on to his teammates for the OT victory in the postgame press conference:

”I tried to give it all to my teammates. And they do a great job of giving it back to me. Total team effort. To be back in the same position we were in three days ago and to come back and even the series is big time.”

The bottom line is this—the only way Cleveland wins this series is by playing excellent team defense.

They accomplished this in Game 2, and no individual had a bigger impact on defense than Dellavedova. His constant harassment of the league MVP led Curry to doubt his own shooting stroke:

“Shots I normally make I knew as soon as they left my hand that they were off. That doesn’t usually happen. Mechanically, I don’t know if there is an explanation for it, just didn’t have a rhythm and didn’t find one the whole game.”

Cleveland will not match Golden State in an offensive showing during this Finals. It probably would not have even happened had Love and Irving been healthy for this entire series.

The only way for a team like the Cavaliers to defeat a team such as the Warriors is by limiting Golden State’s offense. How does that happen? When you have guys like Dellavedova pushing players like Curry out of their comfort zone.

With the exception of another late-game collapse, and a few costly decisions by James and Smith toward the end of regulation, the Cavaliers played a perfect game.

They are so devoid of offensive talent at this stage of the season, that they relied heavily upon James Jones (eight points) and even a little bit of Mike Miller in their Game 2 victory. Both players have rode the bench for much of the second half of the season.

But that is exactly what Cleveland did in Game 2, and it took every ounce of effort for them to win. LeBron admitted that the Cavaliers won’t win in a flashy manner:

“It’s the grit squad right now. If you expect us to play sexy cute basketball, that’s not us right now. Everything is tough and it has to be that for rest of series.

The formula for a championship is already there for Cleveland. It is up to the Cavaliers to execute the formula if they want to win their first championship in franchise history.