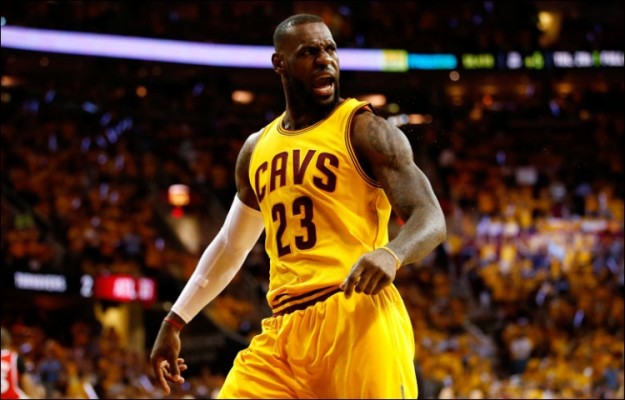 (Cleveland, OH) – Getting off to a roaring start in the first half helped the Cleveland Cavaliers complete a four-game sweep of the Atlanta Hawks, coasting to a 118-88 victory that now sends them to the NBA Finals for the second time in the franchise’s history.

Unless the Houston Rockets pull off a miracle comeback in the Western Conference Finals that’s never happened before in NBA history, the Cavaliers will face the Golden State Warriors in the Finals, with the series getting underway a week from this Thursday—June 4.

Cleveland was able to get Kyrie Irving back in the starting lineup, and the fourth year guard responded by scoring 16 points and grabbing five rebounds.

Cavaliers head coach David Blatt spoke about Irving’s return in the postgame press conference, saying, “He did fabulously. He moved well, he was impactful. But it’s more than that. He wanted to come back and play with his teammates. It was good for the guys to see him out there.”

However, once again, it was LeBron James who paced the Cavs’ offense, tallying 23 points, nine rebounds and seven assists. He narrowly missed a double-double, but that was primarily due to the fact that he sat out the final quarter.

James said during the postgame celebrations, “We’ve worked our tails to get to this point. We’re proud to represent the Eastern Conference.” He later added, “We’ll be ready to go on June 4.”

Teammate Tristan Thompson did come up with a double-double by scoring 16 points and hauling down 11 boards. In postgame remarks, Thompson reflected on what James’ signing did to his approach to what’s become a breakout campaign.

“When he (James) decided to come back, the first thing I did was call the coach (Blatt) and start getting ready in the gym, because I knew what he (James) was expecting.”

The Cavaliers got off to a fast start, shooting 58 percent from the field in the first quarter, while holding the Hawks to just 40 percent from outside. Irving contributed nine points to pace the Cavs.

Cleveland jumped to an early 12-4 advantage, with Irving supplying the spark on a teardrop basket with less than a minute gone. They’d push the advantage to 10 on three occasions before closing out the quarter with a 32-20 lead on a Thompson buzzer beater from the right corner.

The lead continued to inch up, with J.R. Smith’s three-pointer nearly halfway through the second period making it 49-33 in favor of the Cavaliers. Just a minute later, that advantage rose to 20 on a spinning layup from James.

Atlanta was able to make a small dent by the time intermission rolled around, cutting their deficit to 17 at 59-42.

Smith said in postgame comments, “It’s incredible to think where we started to where we are now.” He also acknowledged the strong performances of three players who entered the postseason with no playoff experience: Irving, Thompson and Matthew Dellavedova.

“For the first time being in the playoffs, it’s like they’re the veterans and we’re the rookies,” said Smith.

When play resumed, the Cavs continued to build their lead throughout the third quarter, though the Hawks’ one attempt at getting back into the game only saw them slice the margin to 15 at 70-55, midway through the stanza.

However, a 15-5 Cleveland run ended any chance of a comeback, as the Cavaliers took an 85-60 lead into the final 12 minutes.

The fourth quarter was strictly garbage time, with Cavs fans cheering throughout until the final horn sounded.

James talked about the long path the team has taken, saying, “No matter what happens from here on out, for us to have gotten as far as we have, with all the adversity. It’s something to be proud of.” James also admitted, “Could I foresee this at the start of the season? I couldn’t.”

Going back to the up-and-down nature of the season, James also said, “I don’t know how many chapters in a book this season, but it’s at least five.” That said, James, also said, “One thing we haven’t got caught up in is feeling sorry for ourselves.”

Atlanta struggled all evening from long range, connecting on just five of 32 three-point attempts, and were once again dominated on the boards by a Cavs team that was determined to end the series.

Dellavedova, the subject of controversy throughout the series, contributed 10 points in the clincher, and was cheered heartily by the sellout crowd at each point. Afterwards, he acknowledged the support by saying, “I appreciate the support of the fans. It’s a great place to play.”

Blatt spoke about the team’s mindset as it awaits the start of the Finals, saying, “For a day or two, we’re going to enjoy it, then get back to work.”

The first two contests of the Finals will be at the home of the Western Conference winner before the scene shifts to Quicken Loans Arena on Tuesday, June 9.