A Collection of Creatively Hateful Tweets to Kelly Olynyk 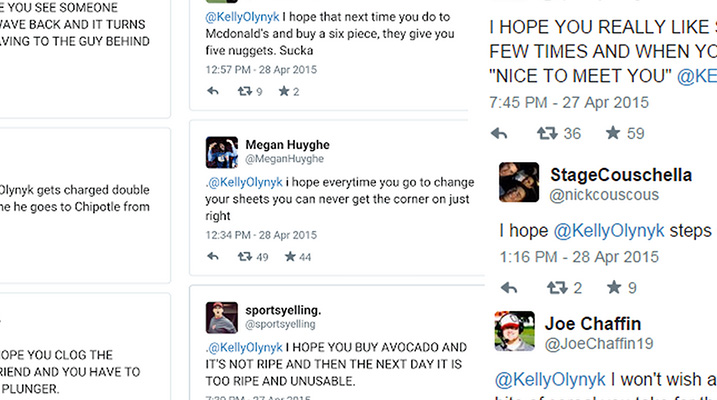 A plethora of fans across America have expressed their recent dismay with what has transpired over the past couple days between Boston Celtics forward Kelly Olynyk and Cleveland Cavaliers forward Kevin Love. Although Olynyk does have his backers who claim that Olynyk’s dismantling of Love’s arm is a part of the game, many have expressed vitriol disgust due to the fact that Love may be out for the rest of the postseason.

Some creative fans took to social media the past couple days to creatively express their hatred towards the Celtics forward. We’ve gathered some of the best with the help of Reddit.

.@KellyOlynyk I HOPE YOU SEE SOMEONE WAVING AND YOU WAVE BACK AND IT TURNS OUT THEY WERE WAVING TO THE GUY BEHIND YOU.

.@KELLYOLYNYK I HOPE YOU CLOG THE TOILET OF A NEW FRIEND AND YOU HAVE TO ASK THEM FOR THE PLUNGER. — sportsyelling. (@sportsyelling) April 28, 2015

.@KellyOlynyk i hope everytime you go to change your sheets you can never get the corner on just right — Megan Huyghe (@MeganHuyghe) April 28, 2015

.@KellyOlynyk I HOPE YOU BUY AVOCADO AND IT’S NOT RIPE AND THEN THE NEXT DAY IT IS TOO RIPE AND UNUSABLE. — sportsyelling. (@sportsyelling) April 27, 2015

I HOPE YOU REALLY LIKE SOMEONE YOU’VE TALKED TO A FEW TIMES AND WHEN YOU SEE THEM AGAIN THEY SAY “NICE TO MEET YOU” @KELLYOLYNYK — sportsyelling. (@sportsyelling) April 27, 2015

.@KellyOlynyk I HOPE WHEN YOU FOLD YOUR LAUNDRY YOU ARE ALWAYS ONE SOCK SHORT — Megan Huyghe (@MeganHuyghe) April 28, 2015