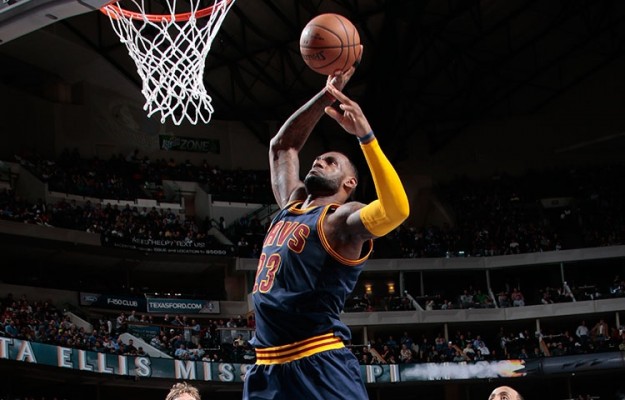 (Dallas, TX) – In a big test on the road, the Cleveland Cavaliers (41-25) made yet another huge statement to the rest of the NBA in a 127-94 beatdown of the Dallas Mavericks (41-25) on Tuesday night at American Airlines Center.

After being down 31-26 following a very entertaining first quarter, the Cavs went on an absolute tear to score a whopping 41 points in the second frame. A win like this must feel great around the locker room, considering how well Cleveland played across the board.

“One of the main reasons we had such a great game was we were finally able to practice yesterday with the extra off day,” said Cavaliers head coach David Blatt after the victory.

LeBron James, who has noticeably not worn his trademark headband during the last two games, led the way for the Cavs with 27 points, eight assists and seven rebounds.

LeBron James says last time he started game without a headband was rookie year against Detroit. Insists nothing prompted him to go without.

On James Jones‘s three-pointer early in the second quarter that was assisted by the Akron product, James passed legendary Cleveland point guard Mark Price for most assists (4,207) all-time in a Cavaliers jersey.

The Cavs simply shot lights-out from the floor, hitting over 50 percent on the night and draining 15 of 32 three-point attempts. Going into the third quarter, the Cavs’ backcourt had already done a lot of damage to Dallas on the evening. Kyrie Irving and J.R. Smith, who combined to shoot six of nine from behind the arc, put up 22 and 21 points respectively.

As each starter on the Cavs scored at least 17 points, Kevin Love and Timofey Mozgov were superb as well on Tuesday night. Love contributed yet another double-double with 21 points and 14 rebounds, while Mozgov had 17 points, four rebounds and two blocked shots.

Off the bench, Iman Shumpert was quietly a star for the Cavs. The shooting guard racked up seven points, four rebounds, six assists and a staggering six steals during an impressive performance.

The Mavs, who gave the early impression that the game would be going back-and-forth all night with the Cavs, looked completely listless from the early stages of the second quarter until the final whistle.

Dallas power forward Dirk Nowitzki, a 13-time NBA All-Star, had a forgettable game with only 13 points on three of 10 shots from the floor. Chandler Parsons, in his second game back from a left ankle injury, led his team in scoring with 18 points. Monta Ellis and Amar’e Stoudemire also scored in double figures for the Mavs, as they respectively finished with 17 and 15 points.

“I’m sick to my stomach about this,” said Mavericks head coach Rick Carlisle after the blowout loss. “This is the lowest point we’ve been at. I put it all on me.”

Up next, the Cavs will travel south to take on the defending-champion San Antonio Spurs (40-23) on Thursday night at AT&T Center. This highly anticipated contest, which is scheduled to tip off shortly after 9:30 pm ET, will be broadcast nationally on TNT.