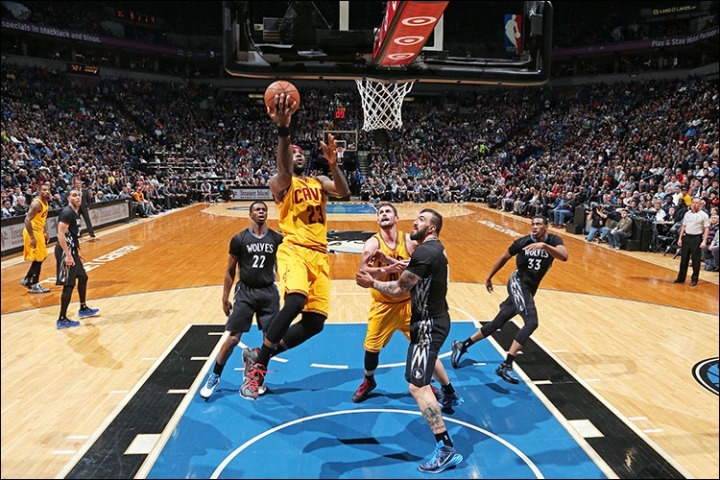 James had 16 for the quarter, and finished with a game-high 36 points to help the Cavs boost the team’s winning streak to 10. During the final 9:22 of the contest, Cleveland used a 23-5 run to turn what had been a tightly-contested affair into a comfortable win.

The key was the Cavalier defense that helped shut down Minnesota in the final quarter, allowing them just 11 points and holding the Timberwolves to just two field goals in 16 attempts during that run. They also forced five turnovers in that stretch.

When the fourth quarter started, it was Minnesota that held a 79-76 lead, and the Timberwolves were able to twice bump the lead up to five, but the Cavaliers tied it up at 83 on a three from Matthew Dellavedova.

A James basket tied the game again, and his three gave the Cavs back the lead for good at 88-85 with 8:09 left. Another three right before the shot clock expired boosted the margin to seven at 94-87 with 5:08 to go.

After another James basket as well as another Dellavedova three made it 99-87 with 2:28 left, Cleveland coasted the rest of the way.

In postgame comments, James said, “We just gave maximum effort in the fourth quarter. In the first three quarters, we played like we were on a back-to-back”

Cavs Head Coach David Blatt simply said about James after the game, “He showed why he’s the best player in the game, again.”

About the overall team performance, Blatt said, “We did have good moments early, but we showed some great maturity in getting the win.”

As expected, Kevin Love was the target of boos throughout the evening, including every time he touched the ball. He acquitted himself well though, finishing with his 27th double double of the year by scoring 14 and grabbing 17 rebounds.

Afterwards, Love had no problem with the issue, saying, “I thought it was a pretty good reception, and it went well.” Love had praise for Minnesota’s effort, saying, “They picked up the pace on us, they were playing together.” However, he was more concerned about getting the victory, commenting that, “It’s what we came here to do.”

Blatt had praise for Love’s effort in the face of such animosity. “I thought he handled it beautifully. (It’s) not an easy situation.”

Dellavedova said in the postgame lockerroom, “We had to grind it out. Four games in five nights is always tough.” He also talked about the defensive performance in the fourth quarter, saying, “We’re definitely trying to make it part of our identity.”

Minnesota started off the game with a three, but the Cavaliers quickly put together a 14-3 run to take early control of the game. The first Cleveland basket of the game was on a jump hook by Love, who finished with six in the opening quarter.

The Timberwolves were able to chop the margin to three on three different occasions, but Timofey Mozgov’s strong inside game saw him conclude the opening 12 minutes with 10 points as the Cavaliers held a 30-21 advantage.

Early in the second quarter, the Cavs were on the verge of blowing the game open, leading 34-21 after a turnaround jumper by James, but Minnesota was able to get the deficit back down to five at the 7:16 mark of the second with an 11-3 run.

The Cavaliers then bumped the lead back up to nine, only to see the Timberwolves run off seven unanswered points in just 94 seconds to make it 45-43 in favor of Cleveland. Less than a minute later, the game was tied at 47, but the Cavs left the court with a 52-49 halftime advantage.

The cat and mouse game continued after the break, with Minnesota tying it up at 61, only to see the Cavaliers score five straight points. Then, after Cleveland held a 70-66 advantage, the Timberwolves tallied seven unanswered points of their own, given them a 73-70 lead with just under three minutes left in the quarter. The Cavs were able to tie it at 74, but when the quarter ended, Minnesota once again had a three-point lead at 79-76.

Blatt said that he had reservations entering this contest, saying, “I wasn’t at ease about this game, since this was our fourth game in five nights, and the emotions surrounding Kevin.”

Having faced the worst team in the NBA, the Cavs now return home for a Monday night matchup against the second-worst team in the Eastern Conference, the Philadelphia 76ers. The game will be a rematch of the January 5 clash in which the Cavaliers blew a large lead in a 95-92 loss. Tipoff is set for just after 7 ET Eastern.