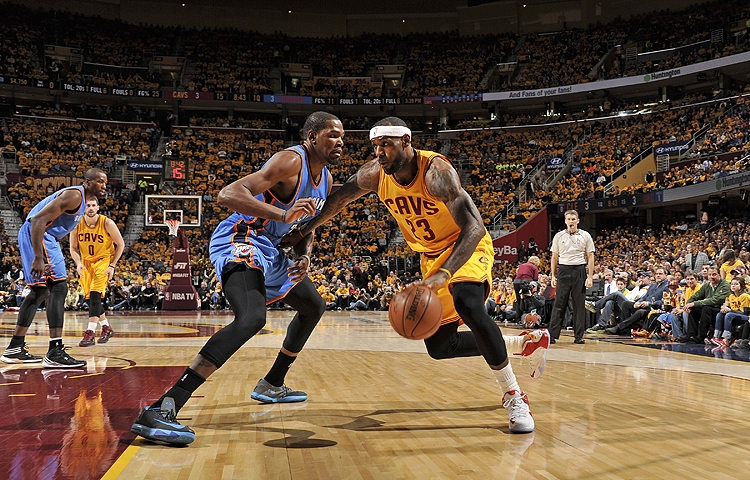 (Cleveland, OH) — The streak is alive. The Cleveland Cavaliers defeated the Oklahoma City Thunder 108-98 in a highly-touted inter-conference showdown Sunday afternoon, carrying their win streak to an impressive six games.

That’s not the only streak that was kept alive Sunday. The Cavs, behind LeBron James‘ 34 point, seven rebound, five assist outing have now eclipsed 100 points in seven straight games — their most since January of 2010. It’s also the team’s fourth straight game holding their opponents under the century mark, as they are finally beginning to string together several solid defensive outings.

“Long term, in order for us to win and compete at a high level we have to defend. We understand that offense is going to come and go, but defense has to always be there,” said James when asked about his team’s budding defensive quality.

After a mediocre first quarter that saw the Cavs facing a six point deficit, the team rallied in the second. James scored 15 points in the quarter, which saw Cleveland outscore OKC 37-23, in one of their best all-around single periods this season.

“Without question, we’re playing as a unit. You see the difference,” coach David Blatt explained in his postgame presser.

The Thunder were not ones to go away easily, however. After trailing by eight going into halftime, OKC fought their way back to tie the game with less than a minute left in the third, before Matthew Dellavedova and Kyrie Irving connected on back-to-back buckets to make it a five-point game heading into the final quarter of play.

After not scoring a single point in the third quarter, James came out like a man possessed in the fourth, scoring his team’s first eight points in the period, stretching the lead back to double-digits. Oklahoma City never recovered.

LeBron wasn’t the only one on his game Sunday. Kyrie and Kevin Love put up 21 and 19 points, respectively, as the “Big 3’s” point tally rose to an impressive 74 for the night. Love recorded his 24th double-double of the season, as he chipped in 13 rebounds as well.

Tristan Thompson provided a much-needed spark for off the Cavaliers bench, stepping up his double-double tally to 11 on the season with 10 points and 16 rebounds. Yet again, Thompson was a hound on the offensive glass and gave his team a plethora of second chances with five monumental offensive boards.

The Thunder’s newest player, Dion Waiters, struggled in his return to Cleveland, putting up 14 points on 5-15 shooting (2-7 from three) after being booed by some fans as he stepped onto the court for the first time Sunday.

The Cavaliers, who now sit five games above .500 at 25-20, look to take their win streak to seven games as they head North to take on the division rival Detroit Pistons on Thursday night. That game can be seen at 7 p.m. E/T on Fox Sports Ohio.