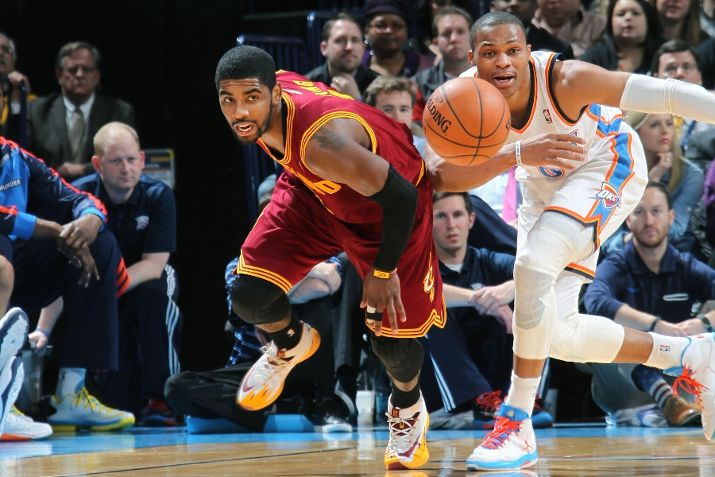 (Cleveland, OH) – After they achieved their fifth straight win on Friday night, a 129-90 massacre of the Charlotte Hornets, the Cleveland Cavaliers (24-20) will face a huge test on Sunday afternoon as they host the Oklahoma City Thunder (22-21) at Quicken Loans Arena. The game will be broadcasted nationally on ABC and is scheduled to tip off shortly after 3:30 pm ET.

Just like the Cavs, the Thunder are a team that has underachieved so far up to this point in the season due to injuries. As the Cavs have their All-Star trio of LeBron James, Kyrie Irving and Kevin Love, the Thunder have their own roster of star-studded firepower.

All-Star forward Kevin Durant has missed 22 games and All-Star point guard Russell Westbrook has missed 13 games for the Thunder this season, but both the Cavs and Thunder are finally healthy across the board. However, Durant and Westbrook are the highest scoring duo in the NBA as they average 25.3 and 25 points per game respectively.

“It’s going to take 48 minutes of good basketball,” said Oklahoma City Thunder head coach Scott Brooks on his team’s matchup with the Cavs. “LeBron James and all their new players they’ve added, they have as deep of a team (as anybody) in the league.”

Despite a 3-12 start to the season when both Durant and Westbrook were dealing with injuries, the Thunder have gone 19-9 since and are in hot pursuit of a playoff spot.

The Cavs will also see a familiar face when Thunder shooting guard Dion Waiters returns to town in an opposing team’s uniform.

Waiters, who was the Cavs’ fourth overall pick in the 2012 NBA Draft, has averaged 11.4 points per game in eight contests with the Thunder.

“To be truthful, it’s like a regular game. I’ll just come out there, be ready, play basketball, don’t think too much and have fun,” said Waiters about facing his former team. “But I’m more excited than jittery. I’ve got that chip on my shoulder every day.”

The Cavs will need to be extremely efficient on the glass in order to come out with a win against the Thunder, as Oklahoma City currently leads the league in rebounds with 46.6 per game. This bodes well for Timofey Mozgov, who has grabbed double-digit rebounds in five of his eight games played for the Cavs to go along with 10.8 points per game in that span.

“Obviously Timo is having an impact on our defense,” said Cleveland Cavaliers head coach David Blatt. “But it’s also the collective effort of our players.”

Although he has reverted to a role off the bench, Tristan Thompson has shown his value this month by averaging 10.2 points and 8.6 rebounds per game. This includes a dominating performance in last week’s 126-121 win over the Los Angeles Clippers, in which he had 24 points (10 of 12 from the field), 12 rebounds and two blocks in 40 minutes played.

With big bodies on their roster like Durant, Serge Ibaka, Steven Adams and Kendrick Perkins, the Thunder will give Love, Mozgov and Thompson all they can handle in the paint on Sunday afternoon.

Outside of great rebounding, the Cavs will need to continue their great three-point shooting as of late, which has thrust them into 10th in the NBA with 8.4 three pointers made per game. Much of this is in large due to the impact of J.R. Smith, who has averaged 3.2 three pointers made per game in nine games for the Cavs to go along with his 15.3 points per game as a starter.

“He’s (not only) given us great attitude but fantastic basketball; he’s a great fit for this team,” said coach Blatt on Smith’s importance to the Cavs.

With their extremely aggressive play on offense, the Thunder tend to attack the basket and draw fouls. Westbrook is currently ranked third in the NBA in free-throw attempts per game with 8.5, which is just above James’ 8.3 attempts that ranks fourth in the league.

Recently, Irving has stepped up his defense immensely on opposing point guards, but he will need to give everything he has in order to slow down a Westbrook offensive onslaught.

In order for the Cavs to win their sixth game in a row, they will need to continue to play fantastic team basketball like they have been doing lately. The team chemistry is finally clicking and the players seem to trust Blatt’s system more by the day.