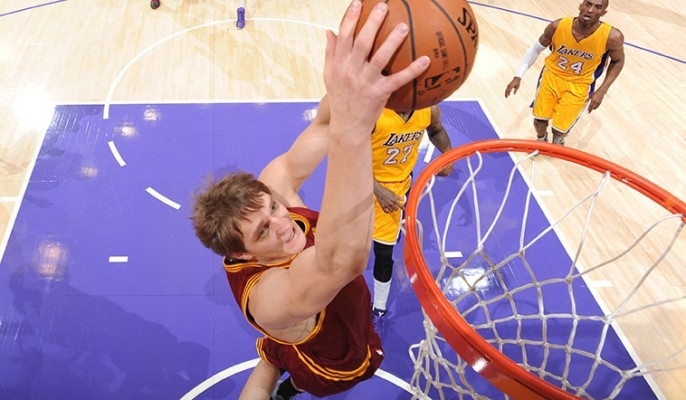 During the third quarter of the game, Varejao fell to a heap under the basket after he went for a rebound during the victory. He had to be helped off the court, while he eventually left Quicken Loans Arena with the aid of crutches.

Varejao, who was officially ruled out for the rest of the season on Christmas Eve, provided the Cavs with news they certainly dreaded. The loss of Varejao, a 6’11” Brazilian center who averaged 9.8 points and 6.5 rebounds per game before his injury, immediately affected the Cavs as they would fall to 19-17 after a 105-93 home loss to the Houston Rockets on Wednesday night, January 7th.

Something had to be done in order to solidify the Cavs in their frontcourt, who began to free-fall in the absence of Varejao and LeBron James. On January 7th, the Cavs traded two protected 2015 first-round picks to the Denver Nuggets in order to acquire 7’1” Russian center Timofey Mozgov.

The move to acquire Mozgov did not come as a surprise, since the Cavs had been in talks to land Mozgov from the Nuggets for months. Also, head coach David Blatt had developed quite a strong connection to Mozgov from the 2012 Summer Olympics in London, where Blatt coached the Russian national team to a bronze medal.

“Coach Blatt is extremely excited to have added Timofey, and I think that’s something that’s a great fit for all of us,” said Cavs general manager David Griffin after the trade was completed. “We get up here and we talk about this all the time. We talk about fit, we talk about taking time to grow together. … His numbers didn’t need to be flashy. We’ve got three guys that are top-20 players in the NBA. Those guys can be flashy. We need guys that do the dirt work.”

In his brief time with the Cavs so far, Mozgov’s desired effect on the team, according to Griffin’s assessment, has been pretty spot on. After eight games played with Cleveland (seven starts at center), Mozgov has averaged 10.8 points, 9.4 rebounds and 1.1 blocks per game in a solid 27.4 minutes per game in Cavaliers’ wine and gold.

After Varejao’s injury, which can be labeled as an “unwanted early Christmas present” for the Cavs, Mozgov has already earned high praise from his teammates on his progression. James has already went on to compare Mozgov’s impact to Cavs legendary center Zydrunas Ilgauskas, who was a two-time all-star in 2003 and 2005 for Cleveland.

“It’s funny, I was talking to my friend the other day and I said he’s probably the best, as far as big, true big,” James said on Mozgov. “You know, Chris Bosh is a great big, Kevin Love is a great big. But I’m talking about a true, seven-foot, big guy. He’s probably the best one I’ve played with since Z (Zydrunas Ilgauskas). They have different skill sets, but they both have skill. They know how to play. Sometimes you get a lot of bigs that are just big. He knows how to play and it’s great to have him out there.”

During the Cavs’ five-game winning streak that has propelled them back to a 24-20 record, Mozgov has scored in double figures four times and has also had double digit rebounds in four games as well. His shooting efficiency from the floor has been stellar to say the least, as Mozgov has made 26 of his 42 shots from the field in that five-game span.

As the Cavs will look to win their sixth game in a row on Sunday afternoon against the Oklahoma City Thunder (22-21), Mozgov’s importance to the team going forward will only grow. Although they are 24-20, currently good enough for the fifth seed in the Eastern Conference, the Cavs have finally developed a consistent rotation for Blatt without team chemistry being deflated by injuries. To say the least, Mozgov and Cleveland will be very dangerous when the playoffs come around if the team maintains this mindset.