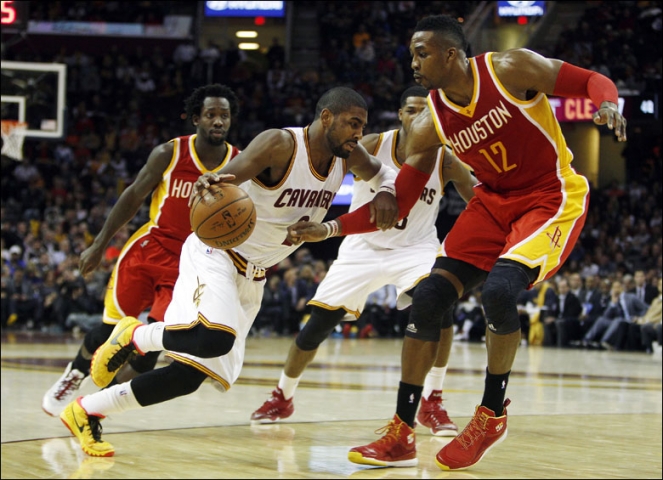 (Cleveland, OH) – An 11-2 run by the Houston Rockets over a four-minute stretch in the final quarter was costly for the Cleveland Cavaliers as they dropped a 105-93 decision at Quicken Loans Arena on Wednesday night.

The loss was the Cavs’ sixth loss in their last eight games, which spoiled a strong comeback performance from Kyrie Irving, who had missed Monday night’s 95-92 loss to the Philadelphia 76ers. The fourth-year guard poured in 38 on the night.

After the game, Cleveland head coach David Blatt said about Irving’s effort, “The kid laid it out there and he was obviously terrific.”

With 10:10 to play in the game, Tristan Thompson’s two free throws for the Cavaliers tied the game at 77. At that point, the Rockets took full control of the game, concluding the surge on a pair of three-pointers from Corey Brewer.

The Cavs were able to chip away twice to get the deficit down to six, the last coming at 90-84 with 4:45 left. After Houston pushed the lead back up to eight, Kevin Love missed on both ends of a pair of free throws, and Jason Terry essentially ended the game with a three-pointer from the left corner with 3:14 to go, making it 95-84.

When asked if the team ran out of gas in the fourth quarter, Blatt noted that the manpower shortage means that former bench players are seeing more extensive playing time and that, “We don’t have the kind of production from the bench that we need.”

Irving said, “We got great looks in the fourth, but we just didn’t convert,” and added, “It’s just one of those things. We just have to keep our head high.”

In his postgame comments, Love said, “We just need to get some guys back, and then we’re going to start winning some games.”

At the start of the quarter that saw the Cavaliers holding a 74-73 lead, Dwight Howard helped power the Houston offense early with seven of the team’s first nine points to give the team an 80-77 advantage with 9:24 to play.

Both teams used the three as a weapon during the game, combining for 22 long-range bombs on the evening. Besides leading all scorers, Irving also paced the parade of treys with four.

Blatt explained the Cavs’ defensive problem defending the three by saying, “We got sucked in too many times not rebounding the basketball. They’re going to take their shots.”

In the first quarter, the three was also the weapon of choice with eight different players connecting from long range, including five from Cleveland. The Cavs’ problem was those shots were seemingly the only ones they were making. When within the three-point line, Cleveland was only able to hit two of 12 shots.

Love scored just two points in the quarter, a far cry from his usual output at the game’s outset. The points came via the free throw line, with Love missing all five of his field goal attempts.

J.R. Smith made his first appearance in a Cavaliers uniform, replacing Matthew Dellavedova with 5:48 to go in the stanza. He missed all five of his outside shots, though one was a lengthy fling from beyond half court to end the first quarter.

Houston collected the first two baskets to open the game, but the Cavaliers quickly evened the score on an Irving jumper and a pair of free throws. Following Howard’s alley-oop with 9:05 to go to make it 6-4 in favor of the Rockets, Dellavedova answered by drilling a three-pointer to give the Cavs their first lead of the contest.

Trevor Ariza’s three just nine seconds later took back the lead for Houston, which sparked dueling unanswered scoring runs by each team. First, eight unanswered points by Cleveland included two treys from Mike Miller and Irving to make it 15-9 with 6:20. However, the Rockets took advantage of a pair of Cavs turnovers to make it 20-15 at the 2:38 mark.

After Houston bumped the lead up to six at 26-20, James Jones closed out the scoring with yet another three to cut the Cavalier deficit in half at 26-23 after the first 12 minutes.

Irving was on fire during the second quarter, notching 16 points to give him 23 at the half, which included a pair of threes. The latter three came with 14 seconds to go in the half and sent Cleveland to the locker room trailing by one at 49-48 at the break.

Once the teams returned to the court to start the second half, both teams went back and forth with the lead. The Cavaliers’ biggest lead was five after an Irving jump shot with 3:03 that made it 69-64.

Houston’s James Harden led the charge back, scoring five unanswered points to tie the score. After Love tipped in an Irving jumper to take the lead, the Rockets notched a pair of baskets to take the lead back.

Another Love tip-in with 30.1 seconds remaining in the third knotted the score at 73, and the power forward then split a pair of free throws with 6.4 seconds to go to send the Cavs up by one heading into the fourth quarter.

Blatt was asked about the acquisition of center Timofey Mozgov, who he coached during his stint leading the Russian national team. “We really needed a big center to give us size and presence. He’s an athletic, very big center.”

Irving also gave his opinion on the Mozgov trade, saying, “Playing against him, he clogged up the paint.”

Love added, “We needed size. He’s going to be big for us, taking up space.”

The Cavaliers now begin a challenging five-game road stretch against Western Conference squads beginning Friday night with a 10:30 ET tipoff against the Golden State Warriors. The first three games of the trip will again be without the services of LeBron James.