Cavaliers vs. Magic Game Preview: Cavs Look to Bounce Back from Christmas Disaster 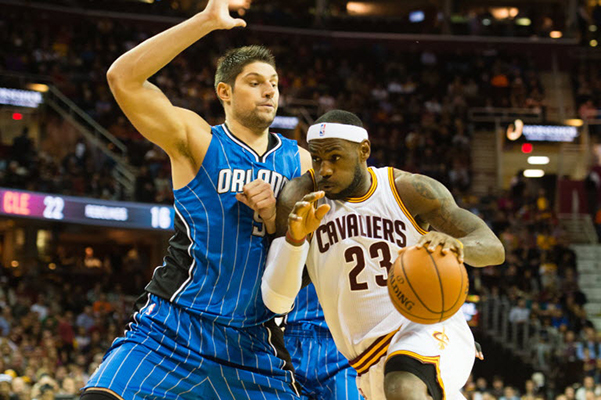 (Orlando, FL) — Hoping to close out their two-day Christmas road trip to Florida on a positive note, the Cleveland Cavaliers (16-11) travel to the Land of Disney for a Friday night matchup against the Orlando Magic (11-20), who are currently in fourth place in the Southeast division.

The last two days have hardly been a time for the fifth-place Cavaliers to be excited about the holiday season. On Wednesday, they received word that veteran center Anderson Varejao will miss the rest of the season due to a torn Achilles tendon.

Yesterday, they dropped a 101-91 decision to the Miami Heat that served as a homecoming of sorts for LeBron James. The only problem was that the pall cast by Varejao’s injury seemed to linger during the first half, when Cleveland fell behind by as many as 17. After intermission, they were able to knot the score, but faded down the stretch.

Varejao’s absence was noticeable, with Kevin Love being used at center during the game. That type of situation figures to be short-lived, because if the Cavs are unable to swing a rumored deal for a big man, navigating a now-treacherous playoff jungle will become virtually impossible.

Cavaliers head coach David Blatt acknowledged the makeshift lineup, saying, “We tried some things differently tonight. At the end of the day, when you lose a guy (Varejao) you have to try and figure it out.”

The loss to the Heat was Cleveland’s third straight loss away from home, giving them a mediocre 6-6 mark on road courts. In four of those losses, the Cavaliers’ inability to inject enough offense proved to be deadly by virtue of being held under 100 points.

Tonight’s game will mark the second meeting of the year between the two teams. Just over one month ago on November 24, the Cavs routed Orlando 106-74 at Quicken Loans Arena. At the time, that win marked a turning point of sorts for Cleveland, which had dropped four in a row entering the game, eventually stringing together eight consecutive wins.

The weakness at center could prove to be troublesome against the Magic, who have one of the best young centers in the league in Nikola Vucevic. The fourth-year seven-footer out of Southern Cal is averaging 18.2 points and nearly 12 rebounds per game. Not surprisingly, he’s already collected 17 double-doubles this season.

That point production is just behind team leader Tobias Harris at forward, who is tossing in 18.6 per contest. Shooting guards Victor Oladipo and Evan Fournier are also contributing to the Magic scoring attack with just over 14 points apiece.

The Cavaliers have been prone to getting burned by good three-point shooting teams, but have taken steps to address that fault by holding its last three opponents to just 24 percent shooting from long range.

Still, Love is at a loss for the continuing struggles on the defensive side, saying after yesterday’s game, “I don’t know, trust probably?” He then added, “Most people would say just trusting each other out there, knowing the different assignments and exactly what we want to do, and sustaining it.”

Despite their record, Orlando has shown it can compete from long range. Entering tonight’s clash, the Magic have connected on 37.5 of their attempts from three-point land. That makes them fifth-best in all the NBA, which means that strong stretch by the Cleveland defense needs to continue.

Despite the above numbers, most of Orlando’s problems this season have been on the offensive side of the ball, as they currently sit with the fifth worst points-per-game average in the NBA at 93.8.

Committing turnovers has also proved deadly for the Magic, who are currently situated in third place in the NBA for most turnovers per game with an average of just over 15. In the earlier loss to the Cavs, Orlando coughed up the ball 17 times and was held mostly in check from beyond the three-point line.

The Magic are coming off a 100-95 Tuesday night win over the Boston Celtics, which stopped a four-game losing streak and marked only the second win in the team’s last eight games.

Orlando came close to a devastating collapse in that game after holding a 25-point lead entering the final quarter. Boston got to within three at 90-87 with 2:34 to go, but the Magic held on for the victory.

After tonight’s game, the Cavaliers will get a day off before facing the Detroit Pistons at home on Sunday afternoon in a 4:30 pm ET tipoff. that game will mark the first of a three-games-in-four-night stretch.