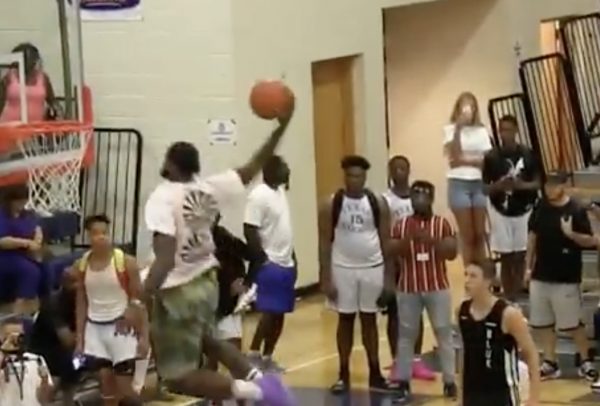 As LeBron James has aged, he has augmented his game to increase his efficiency as well as extend his career.

When he first entered the NBA as a rookie phenom for the Cleveland Cavaliers, however, one of his very first calling cards was his incredible dunking ability.

During a warmup shootaround for one of his son’s recent basketball games, the four-time MVP took to the court to prove to his fans and critics alike that he is still totally capable of jaw-dropping dunks.

It’s pretty stunning to think about the level of athleticism it takes to be able to complete these kinds of dunks. It is even more impressive when you consider the fact that James is 34 years old and on the verge of his 17th season in the NBA.

While detractors claim that James has lost a step and is entering the twilight of his NBA career, this video seems to indicate that he is still very much in the depths of his prime.

While he is no longer playing basketball for the Wine and Gold, there is nothing stopping his fans across the great state of Ohio from marveling at the poetry in motion he continues to display on the court.

It will be interesting to see if his incredible talent is enough to earn him yet another NBA title this season.