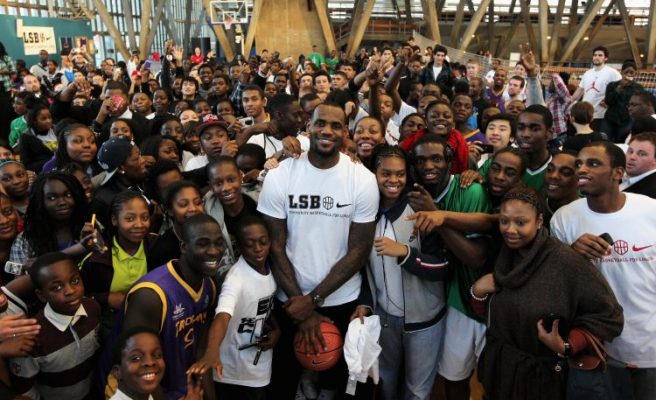 The opening of former Cleveland Cavaliers forward LeBron James’ I Promise School in his hometown of Akron, Ohio last year brought with it praise and support of James’ initiative.

One of James’ past NBA contemporaries, former Los Angeles Lakers guard Kobe Bryant, added his own touch by donating his own young adult book, The Wizenard Series: Training Camp, to the school.

The book was the brainchild of Bryant, though it was actually written by Wesley King. It tells the basketball-themed story of a youth team that acquires a coach with magical powers, with one review calling it a mix of the Harry Potter series and the iconic basketball film “Hoosiers.”

In a Sports Illustrated article three months ago, Bryant acknowledged that the coach in the book is patterned primarily after his former Lakers coach, Phil Jackson. He also indicated that the 600-page book will be the first in a number of books his Granity Studios will publish by the end of next year.

Bryant won an Academy Award last year for an animated short that was based on a poem he had written, having made a smooth transition into areas other than basketball since his retirement in 2016.

Last year, James joined Bryant’s old team as a free agent, but struggled with injuries and was limited to playing in just 55 games as the Lakers missed the postseason.

However, the first year of James’ I Promise School was a success, with 240 third and fourth graders attending. By 2022, it’s expected to have students in grades one through eight.