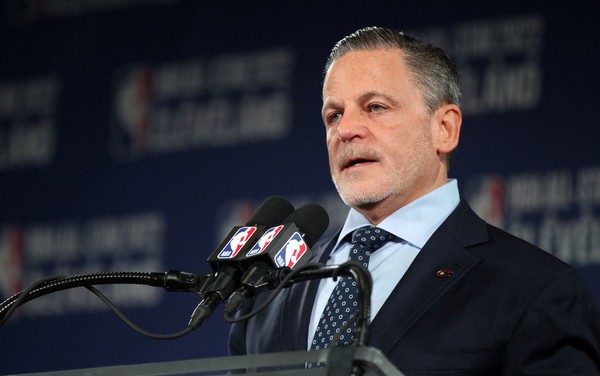 Despite a miserable start that’s seen the team win just seven of their first 29 games, Cleveland Cavaliers owner Dan Gilbert believes that the rebuilding of the franchise will be quicker than expected. In addition, he also offered an enthusiastic endorsement of the team’s front office.

Gilbert’s pronouncements came during a Friday conference call with Wine and Gold United, a membership group of Cavs fans who receive fringe benefits by paying an annual fee:

“Our future plans are, as they’ve always been, commit to keep building the franchise into a perennial team that competes for a championship. I have no doubt that if we continue the path here that we will be competing in a shorter period of time than people think. As you build this thing for the long term, I think you are going to see something emerge here in the next couple of years that will be a core and base.

“So take the next two, three years, including this year, and create a core, system and organization that will sustain itself in a competitive nature for maybe six, seven, eight, nine years or whatever from that point. I believe in the mission and the plan. Think we have the right people to lead it.”

Gilbert attempted to put a positive spin on the Cavaliers’ weak start, which has included a number of key injuries and trades of experienced veterans:

“I know the record doesn’t reflect it if you judge everything on record this year, but I really believe from a business standpoint and across the basketball operations it has the best people, more people swimming in the same direction than we’ve ever had. It just feels way different, way better, more optimistic (than the first time LeBron [James] left). We feel we have more assets, more talent to trade, not necessarily to trade but more assets to deal with, options to trade if we want to or to make moves to improve the team so, that’s the good news.

“The first time we did end up making a ton of moves and being able to deliver a championship to Cleveland and a lot of that work started in those four years. I don’t think it will be four years here before you start seeing significant improvement.”

The collapse of the Cavaliers this season has largely been tied to the departure of James in free agency, the same scenario that unfolded eight years ago. James returned to the team in 2014 after the Cavaliers had endured four non-playoff seasons and managed to garner the top pick in the NBA draft three times.

In both cases, Gilbert has been at the helm as the Cavs’ majority owner. Having purchased the team in 2005, he’s gone through eight different coaches, including hiring Mike Brown on two occasions. That instability has also been seen in the team’s front office, where no general manager under Gilbert has ever gotten a second contract from him.

Despite the image of a team in chaos, Gilbert made an effort to offer a different image:

“I know there’s been a lot of change and sometimes people don’t like change. But you have to move fast and make changes in this world to get ahead.

“I think the front office is in the best shape it’s ever been. At least, in the 12 or 13 years I’ve been in Cleveland. You have people who are very, very smart, very dedicated. Understand metrics, understand the game, understand drafting, understand trades.”

To his credit, Gilbert has never been afraid to invest heavily in an attempt to bring a championship to Cleveland. That was accomplished in 2016, when he paid a steep price in luxury tax penalties.

However, the upbeat assessment by Gilbert flies in the face of current reality, which is what many fans are focused on right now. When the actual improvement to respectability and title contender status takes place remains a mystery for all involved.