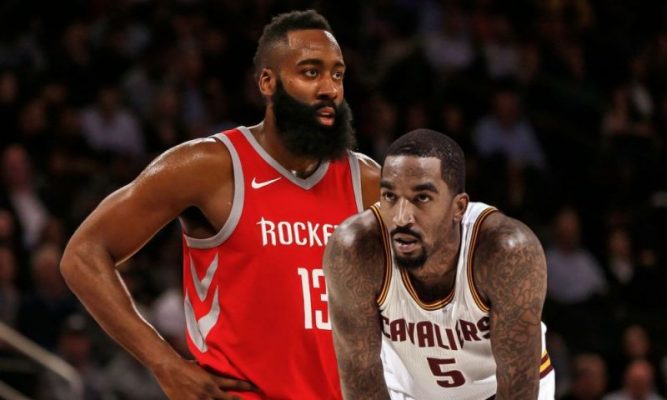 Veteran guard J.R. Smith’s time as a member of the Cleveland Cavaliers came to an end earlier this week, with his status currently in limbo.

However, one report indicated that over the summer, his name was part of trade discussions that involved then-Houston Rockets forward Ryan Anderson.

“The Cavs actually discussed a possible Smith trade with the Houston Rockets over the summer, according to sources. But the talks died pretty quickly, and then-Rockets forward Ryan Anderson, who had been discussed as a possible return for the Cavs, has since been traded to the Phoenix Suns.”

Two specific reasons why teams have been reluctant to deal for Smith relate to his age (33) and the fact that he’s due to be paid $14.72 million this season. He’s technically scheduled to make even more ($15.68 million) next year, but the team paying him can release him and would only need to pay him $3.87 for the 2019-20 campaign.

Despite that earlier breakdown in talks between the Cavaliers and Rockets, Amico isn’t completely ruling them out as a potential trading partner for Smith:

“Still, the Rockets might again have an interest if they feel a veteran shooter such as Smith will fit in and help them in reserve come playoff time. They certainly could find the salaries to match, and sources have indicated they would certainly be open to trading point guard Brandon Knight and forward Marquese Chriss (obtained in the Anderson trade).

“Knight and Chriss for Smith works, salary-wise, but it’s doubtful the Rockets would actually go through with it. Those two could undoubtedly be packaged for a better player.”

Earlier this week, the Cavaliers announced that Smith would no longer play for the team. That came after repeated criticism from the veteran about the team’s focus on rebuilding. The final straw came after he accused the team of tanking this season in order to obtain a high draft pick.

The Cavs have until the February trade deadline to get rid of Smith, though no viable possibilities have yet emerged. Right now, the team is still trying to recover from a miserable 2-14 start that’s also been punctuated with injuries to key players. They play a road game on Friday night against the Philadelphia 76ers.