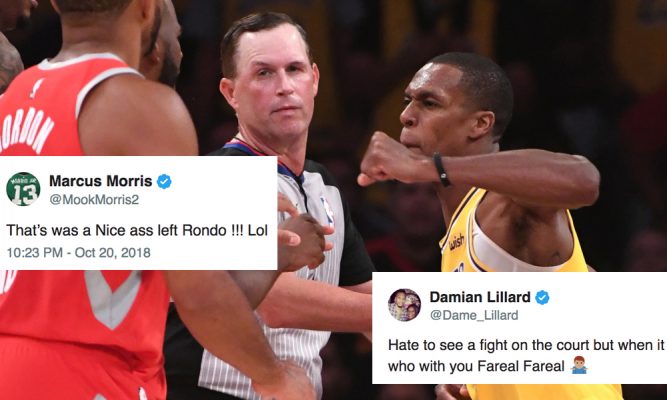 The ugly side of the NBA reared its head in a matchup between the Los Angeles Lakers and Houston Rockets in a Saturday night brawl, and players around the league couldn’t help but react.

Though the specifics are somewhat unclear, it appears that the fight began between Lakers point guard Rajon Rondo and Rockets point guard Chris Paul after Rondo spat in Paul’s face. LeBron James did play a minor role in the fight, but it was to try and act as a peacemaker moments after tempers boiled over.

Either way, it seemed stars throughout the NBA were having fun expressing their opinions on the fight on social media.

Anyone notice them boys (non players) who ain’t want no parts of breaking up the fight???

I see my bro Nip right there ready for whatever LOL….

THIS LAKER GAME GOING UP GHEE!!!

Save your bread fellas! https://t.co/sjFQBVDT72

Hate to see a fight on the court but when it happens… you find out who with you Fareal Fareal ??‍♂️ https://t.co/zL1mLWxGL5

Getting heated early in the season ?

Rondo and CP beef goes back a long time

How many techs they bout to give out lol

He got the Prez! https://t.co/Cb0V8sOCqQ

News about punishments have yet to be revealed, but there’s little doubt that NBA Twitter will have a lot to say once the league’s hammer of judgment comes down on all involved.