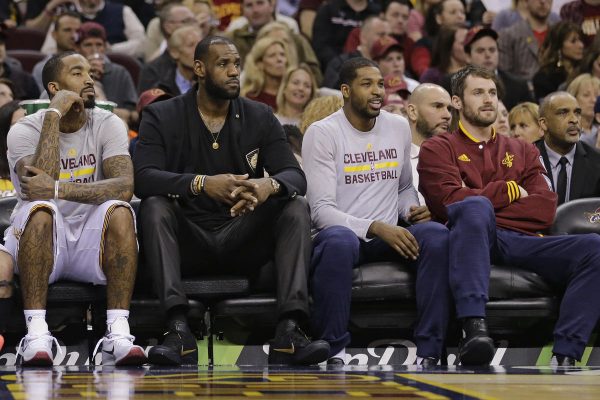 When the Cleveland Cavaliers open up the 2018-19 regular season on Wednesday night in Toronto, their leader of the past four years won’t be on the court.

Despite the loss of LeBron James, center Tristan Thompson indicates that the influence of the future Hall of Famer will still be present because of the leadership he instilled in not only Thompson, but Kevin Love and J.R. Smith as well.

Joe Vardon of The Athletic looked at Thompson’s approach to the upcoming season, which doesn’t figure to include a fifth consecutive trip to the NBA Finals. Yet Thompson is brimming with confidence about how he, Love and Smith will still be able to lead the team to postseason play.

“Bron taught me, Kev and JR so much,” Thompson said. “It’s like you get to that time in life when your parents are ready to let you out of the house. I wouldn’t say we’re kids or nothing like that because we’re all grown men, but I’m saying he taught us so much on how to be great, how to lead, that it’s time for us to spread our wings and do it on our own now. He definitely prepared us.”

While veterans like George Hill and Channing Frye will also be around to help in the leadership department, Thompson is one of three players who was part of all four trips to the Finals with James. That experience and the effort required to succeed will be passed on to the younger players on a revamped team that’s putting a greater emphasis on youth.

Thompson sparked plenty of criticism and ridicule a few weeks ago when he refused to acknowledge that the Cavaliers’ reign as Eastern Conference champions was over. He now indicates that his words had a direct purpose in mind.

“The reason why I said it was for this team, so guys believe,” Thompson said.

The veteran, beginning his eighth year in the league, is well aware that James is no longer around to lead the team. Yet he believes that the team has a roster that can deliver a surprise in the postseason.

“Yeah, of course we lost a great player, our franchise player, but we still have talented, solid players who were starters on past teams and still are starters,” said Thompson. “So why can we not have the season that Indiana had? Or have the season that Boston had when they had Jae Crowder and Avery Bradley and Isaiah Thomas? Why can’t we be one of those teams where people don’t have high expectations, and that team comes out of nowhere and is a contender in the East? Why can’t we be in the same boat?

“As one of the leaders of the team, I’ve gotta believe in the ship, too.”

Thompson himself is looking to rebound from his worst season, which was plagued by an injury that limited him to just 53 regular-season games. His point production dropped to just 5.8 per game, while his main skill of rebounding also fell. But that experience and the challenge ahead have him focusing on the leadership angle. He’ll get a chance to begin testing that skill in his hometown of Toronto on Wednesday night.