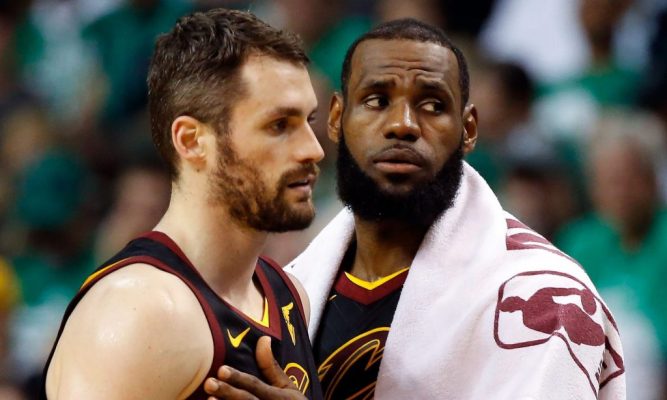 Issues connected to mental health when it came to Cleveland Cavaliers power forward Kevin Love last season became news in March. That’s when he disclosed that he had occasionally battled issues connected to anxiety. In a new interview, Love disclosed that former teammate LeBron James offered him strong praise shortly afterward for taking the courageous step that has the potential to aid many people afflicted with those same issues.

Love spoke with Carson Daly in a talk that will air on Monday on “The Today Show” on NBC and offered a short anecdote about the aftermath of his talk with the media that first noted the anxiety concerns:

“It was a special moment for me because we [he and James] sat towards the end of the bus. He kind of said ‘hey, do you have a moment’ he stopped me … shook my hand, looked me in my eye and said ‘You helped a lot of people today. It’s important.’ That was super powerful for me because not only is he the best athlete in the world, the best basketball player in the world but his influence and having my back with that was super important to me.”

When Love made his disclosure, he received widespread praise for making public an issue that many people are reluctant to acknowledge. In the world of sports, it’s especially rare for athletes to disclose such personal concerns, but Love’s comments came in the wake of former Toronto Raptors player DeMar DeRozan also making a similar admission.

During this offseason, a local Cleveland organization that deals with mental health matters announced that Love would be the recipient of an award in November. The accolade will recognize the veteran’s courage in going public about his own personal problems.

The bond between Love and James has been especially strong over the past four years, with James having urged the Cavaliers to acquire the power forward when James returned to the Cavs in 2014. Over the next four years, the duo was a part of four consecutive Eastern Conference title squads, and in 2016, helped the Cavaliers win the franchise’s first-ever NBA title.

Now that James has signed with the Los Angeles Lakers, that team connection has been severed. However, it appears clear that their friendship off the court will continue to thrive and prosper.