3 Superstar NBA Players Collin Sexton Should Remind You Of 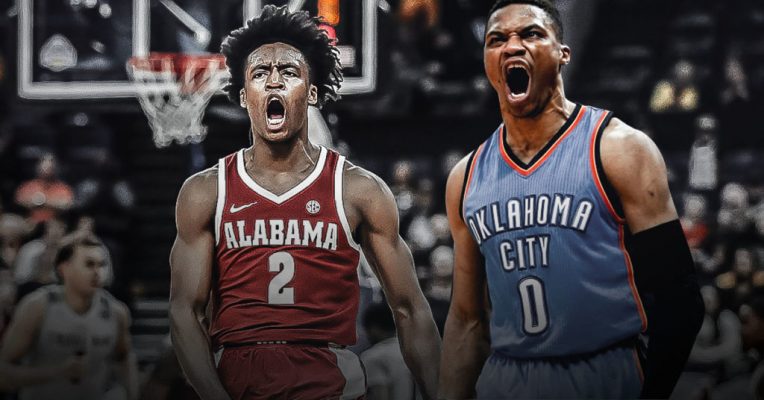 Collin Sexton‘s scintillating performance in this year’s Las Vegas Summer League should provide plenty of hope for Cleveland Cavaliers fans. With that said, here are a few NBA comparisons that immediately stand out:

Bold? Realistic? Take it as you may. Sexton possesses very similar athletic traits to the Oklahoma City Thunder superstar. With a 42-inch vertical and quick first step, Sexton shows off his electrifying athleticism every time he sprints down the court and performs acrobatic finishes.

Much like Westbrook, he is able to use his speed to shrug off defenders, which should provide a significant offensive advantage for the Cavs. Plus, if Sexton continues to knock down midrange jumpers like he did in Summer League, his ceiling will only climb upwards.

Following a career trajectory like Oladipo could be a safe prediction to make for Sexton. Both players’ scouting reports rave about their athleticism and aggressive play on both ends of the floor.

Earlier in his career, Oladipo was known as a strong and willing defender, and his offensive game has considerably developed and been polished over the last few seasons. Sexton enters the league having averaged more points and assists per game in college than Oladipo, and hence should be better positioned as a natural scoring and facilitating threat in his rookie season.

Optimism is key here. To avoid redundancy, the comparisons here take on many of the same points discussed in the similarities to Westbrook: namely, athleticism and vigor.

Can you imagine if this became a reality, though? Sexton already has a better jump shot than Rose did as a 19 year-old. So why should this comparison be a reach?

Ultimately, Sexton displays a level of mental fortitude and grit that highlights his competitive edge and raw passion for the game. Combine these characteristics with continual skills development and he can become a superstar in this league. After all, he’s called Young Bull for a reason.