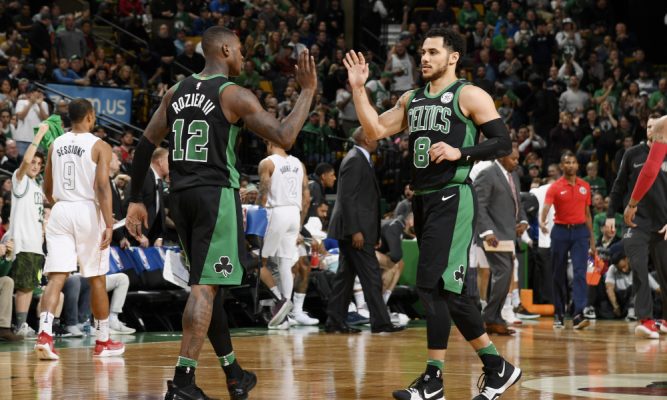 As the Cleveland Cavaliers seek to fill in the remaining holes on their roster, the position of point guard remains one in which they’re seeking more depth. That’s why the name of Shane Larkin has been noted when it comes to the team possibly signing one or more of the remaining NBA free agents.

Joe Vardon of Cleveland.com listed a number of those free agents that might be under consideration by the Cavaliers, a group that included Larkin’s name:

“Another potential fit could be Celtics free agent guard Shane Larkin, who averaged 4.3 points last season but proved a capable backup in the early rounds of the playoffs before a shoulder injury knocked him out against Cleveland.”

Alex Kennedy of HoopsHype.com noted that Larkin is being looked at by 10 different NBA teams, despite having only averaged 14.4 minutes per contest with Boston this past season. That situation was largely attributed to the team’s depth in that department, though the 25-year-old has already played for four NBA teams and also spent a year overseas.

Despite that resume, Larkin is being particular about the team he chooses, which could conceivably mean once again heading overseas. In an interview with HoopsHype, he stated that returning to the Celtics hasn’t been ruled out, but that playing time is an important factor.

“Playing time is important to me,” Larkin said. “I’ve been in a lot of different situations throughout my career thus far. Sometimes I’ve played a lot of minutes, sometimes I haven’t gotten many minutes, sometimes the minutes have been very inconsistent. I’m just trying to find a team that wants me to play good minutes so that I can continue to grow and develop for their team. And hopefully I can stop this streak of playing for a different team every single season. I would probably prefer a multi-year deal.”

The Cavaliers may not be able to promise Larkin much more playing time in any negotiations, since he would likely serve as a third option after veteran George Hill and rookie Collin Sexton. During the 2017-18 campaign, the since-departed Jose Calderon essentially filled that role, seeing action in 57 games during the regular season and averaging 16 minutes per game. He then saw limited time in the postseason.