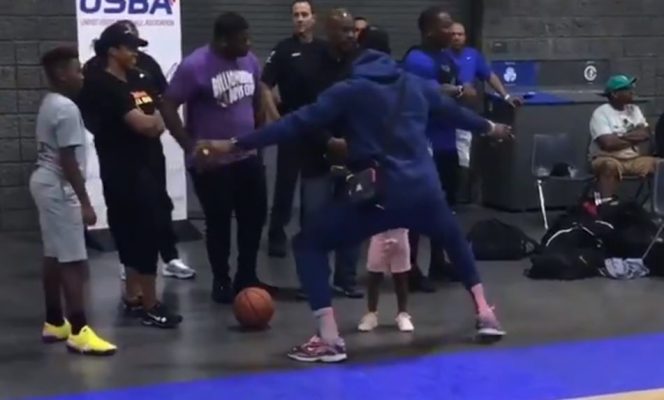 Despite LeBron James having left for the Los Angeles Lakers in free agency, the 15-year veteran is still keeping tabs on his former team, the Cleveland Cavaliers. Having noticed that the Cavaliers’ top draft pick, Collin Sexton, exhibited solid defensive skills during his time in Las Vegas Summer League, James jokingly equated that effort with some playful interaction with his three-year-old daughter, Zhuri.

Playing that @CollinYoungBull D on my daughter and she turned it into a Elvis ?? shimmy dance! ??? https://t.co/OAdKOgWQVR

The impromptu performance of James’ take on Sexton’s defense and his daughter’s uninhibited response came during a break in summer basketball action involving James’ oldest son, LeBron James Jr. While there’s no indication yet that Zhuri will be a standout on the hardwood like her father, the younger LeBron has already caught the attention of basketball scouts and could be following in the footsteps of his legendary father.

It’s very likely that Zhuri isn’t terribly concerned with such matters at the moment. She was born just before James resumed his career with Cleveland in October 2014 and appears to be more interested in gymnastics. Just four months ago, when he was still a member of the Cavs, James escorted his daughter to her first class in that sport:

My girl had her first “nastics” class as she calls it.??‍♀️ Had so much fun, she cried on her way out. ?#ZhuriNova?#YoungGabbyOutThere

Sexton is looking to build on his summer league performance when he enters his first NBA training camp in late September. How much more progress he can achieve in his rookie campaign could determine if the Cavaliers hold on to veteran point guard George Hill.