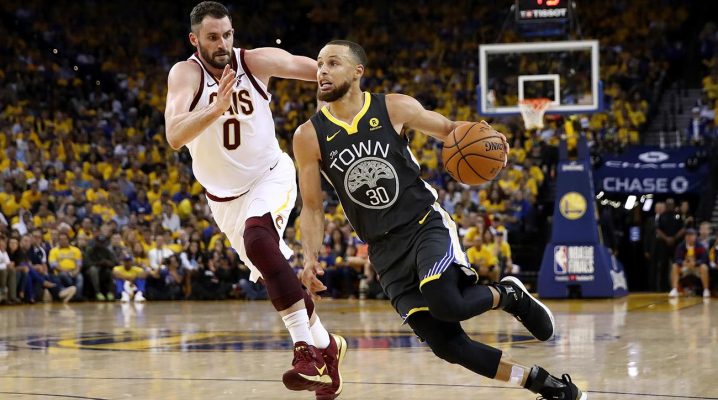 Recently, NBA teams have been following in the footsteps of the Golden State Warriors, who are now two games away from their third championship in four years. Unfortunately, the Cleveland Cavaliers have been one of those teams and that hasn’t necessarily translated into success.

The Warriors are excellent at switching during pick-and-rolls as they have the personnel to play successfully that way. The Cavs, however, may be living in the past too much, resulting in the 0-2 hole they currently face in the 2018 NBA Finals.

It was Game 7 of the 2016 Finals when Kevin Love was left on an island to guard the shifty and fleet-footed Stephen Curry after a pick-and-roll prompted the Cavs to switch. Most of the time, when he’s guarded by a big man, Curry’s eyes go wide as he has the mismatch that he wants. But in the final minute of the do-or-die game, Love was able to keep up with Curry wherever he went and locked him up as the Warriors guard shot a well-contested 3-pointer that missed badly.

Fast forward two years later and the Cavs are still following the same formula in defending Curry. Though Love played him well two years ago, that was just one sequence in which Curry was unsuccessful. In the 2018 Finals, Curry has been salivating at every opportunity he can get to take Love off the dribble and this was evident several times in Game 2.

His final stat line said it all: 33 points on 11-of-26 shooting including 9-of-17 from beyond the arc, and a perfect 5-of-5 from long distance in the fourth quarter. The Warriors blew the game wide open thanks to Curry’s inspired play.

The Cavaliers have been switching repeatedly on defense against the Warriors and that has left the lane wide open many times for dunks and layup attempts by the Warriors. It has exposed the Cavs’ inability in rotating to the open man, leaving the paint vulnerable for easy, uncontested shots that have fueled the Warriors’ runs.

STEPH CURRY IS THE GREATEST SHOOTER EVER pic.twitter.com/hHPgokKqR6

There’s a method to the madness, so to speak. If a team wants to keep switching against Golden State, Cleveland can’t keep doing so without the necessary players to guard Curry.

Cleveland.com’s Terry Pluto wrote about his concern regarding the Cavs’ insistence on switching during pick-and-rolls:

“I’m going to sound like a grumpy old man who thinks rims should be attached to old half-moon wooden backboards. But there was a time — even 10 years ago — when the idea was to avoid switching on most pick-and-roll plays. This is your man … guard him! Fight through the pick.”

Anyone who has played the game or watched the NBA for more than a decade knows where Pluto is coming from. Back in the day, and that wasn’t too long ago, the best defenders stayed on their man unless they had no choice but to switch to avoid leaving the ball-handler from getting a clear path to the basket or an open jumper.

“If you have a lot of athletic players in the 6-foot-7 range with long arms and lively legs, switching on every pick-and-roll works well,” added Pluto. “But not every team has that luxury. Or teams are forced to bench good big men simply to defend the pick-and-roll by constantly switching.”

In Game 2, the Cavs constantly allowed Love to guard Curry even when it was clear that even on his best day, the big man has little to no chance of stopping the Warriors guard from leaving him flat-footed.

“Just because Golden State has won titles by constantly switching pick-and-rolls, does everyone have to do it?” Pluto asked rhetorically. “Cavs coach Tyronn Lue certainly prefers to play that way. So do most coaches. But against the Warriors, it’s not working.”

If the Cavs are to have any chance of winning this series, they have to find another way to defend Curry in pick-and-roll situations. Either Curry’s defender, George Hill or Jordan Clarkson, fights through the pick or they replace Love during these instances with a wing player who can keep in step with the Warriors guard.

The Cavs’ switching defense has been the cause for the Warriors getting a lot of uncontested baskets. Tyronn Lue and his coaching staff need to come up with a better game plan if they want to win the Larry O’Brien trophy once again.