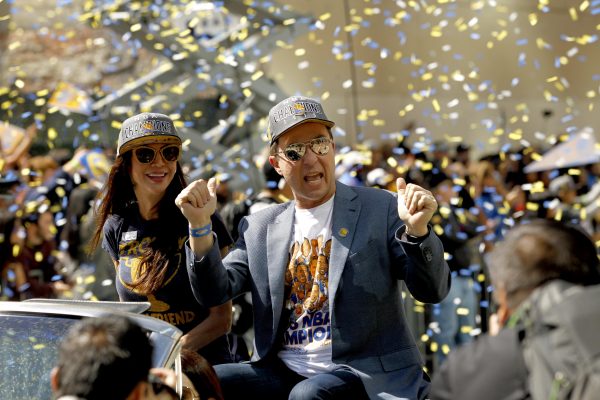 The Cleveland Cavaliers enter the 2018 NBA Finals against the Golden State Warriors as heavy underdogs, but may have some added motivation entering the series that gets underway on Thursday night. That’s because Warriors owner Joe Lacob is lamenting the fact that the Cavaliers will be his team’s opponent for the fourth consecutive year.

"But having said that, LeBron James is an immense challenge, an incredible player. It’ll be fun." ??‍♂️

In this rivalry that’s been forged by those finals matchups, the Warriors currently hold a 2-1 advantage. This season, the Cavaliers’ struggles throughout the campaign had seemingly put them out of the running to reach the finals again. However, winning Game 7 of the Eastern Conference finals on the road over the Boston Celtics has sent them to another meeting with the Warriors.

Golden State’s road to the finals this year hit a rocky stretch during their conference finals against the Houston Rockets. They were forced to come back from a 3-2 deficit and also win Game 7 on the road. In each of the final two games, they also needed to bounce back from a double-digit deficit at halftime.

The one finals appearance won by the Cavs came in 2016, which coincidentally was the same year that Lacob had made a similarly disparaging remark about the league in general that smacked of arrogance:

“We’re light-years ahead of probably every other team in structure, in planning, in how we’re going to go about things,” Lacob said. “We’re going to be a handful for the rest of the NBA to deal with for a long time.”

Those words were offered in the midst of the Warriors’ record-setting 73-win regular season. That was expected to translate into a second consecutive championship and put them in the conversation as the greatest team in NBA history. The only problem was that the Cavaliers bounced back from a 3-1 deficit in the finals, winning two games at Oracle Arena to give the franchise its first title. This year’s edition of the Cavs is hoping once again that karma strikes with a vengeance.