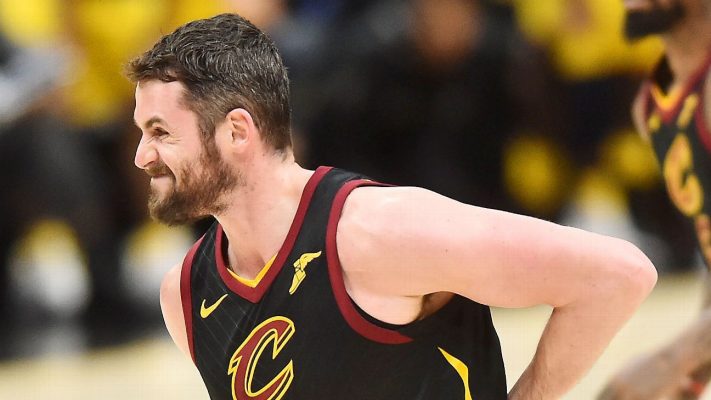 The Cleveland Cavaliers evened up the Eastern Conference finals, 2-2, after a huge Game 4 win on Monday night. While they are heading back to Boston with a tied series and all the momentum, two of their key role players did not have their best nights.

Both Kevin Love and Jeff Green struggled in Game 4, with Love recording just nine points, 11 rebounds, and three assists in 29 minutes, and Green finishing the game with two points and five rebounds in 20 minutes.

According to Joe Vardon of Cleveland.com, both of those lackluster performances could have been because Love and Green were struggling with some minor injuries.

“Before Game 4 (so he wasn’t making excuses), Love told cleveland.com he re-aggravated his sprained left thumb last series against Toronto,” Vardon wrote. “He originally suffered the injury in Game 2 of the first round against the Pacers.

“Jeff Green, meanwhile, shot just 1-of-5 off the bench with five rebounds and two turnovers. He emerged from the locker room at halftime with his left elbow wrapped, and mostly settled for awkward jumpers.”

“I thought Jeff could have been better,” Cavs Lue said on a conference call before boarding the plane for Boston. “I thought more aggressive, especially rebounding the basketball. But he did have a little injury going into halftime with his elbow and that could have made him a little tentative.”

As for Love, he was more than happy criticizing his own game.

“It was tough,” Love said of his Game 4 performance. “I only had three shots at halftime, I had five fouls with seven minutes to go in the third quarter. Just tough to get anything going.”

Despite the minor injuries, Lue and the Cavs are feeling confident heading into a pivotal Game 5.

To get the win on Wednesday, both Love and Green are likely going to have to show up in a big way. Hopefully, the full day of rest will help them get back to full health so that they can both have as positive an impact on the court as possible.