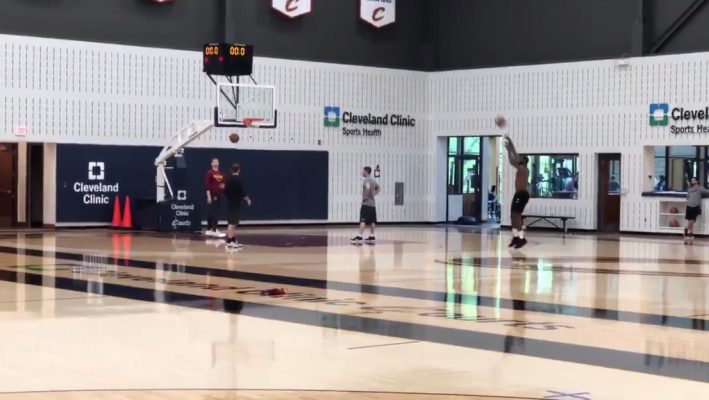 Cleveland Cavaliers forward LeBron James remains the focal point of the the team’s offense as it seeks to bounce back from an 0-2 deficit to the Boston Celtics in the Eastern Conference finals. Making sure that his shooting touch was still sharp after the Cavaliers’ practice on Friday, James put the byproduct of his remarkable work ethic on display by connecting for 12 consecutive 3-pointers.

Steph who? Count how many he made in a row. pic.twitter.com/8O9DLdQ4ws

James knocked down five long-range bombs during Tuesday night’s loss in Game 2, part of a triple-double performance that saw him finish with 42 points. In Cleveland’s 13 postseason games this year, James has connected for at least one 3-pointer in nine games. However, he’s struggled in this area during the playoffs, connecting at just a 29 percent rate after hitting 37 percent of his attempts during the regular season.

Still, the need for teammates of James to step up and deliver has become a necessity with the Cavaliers just two games away from elimination. James will get the opportunity on Saturday night to see if that golden practice touch remains when the Cavaliers and Celtics take the court at Quicken Loans Arena for Game 3 of the best-of-seven series. Tipoff for this pivotal game will be shortly after 8:30 p.m. ET.