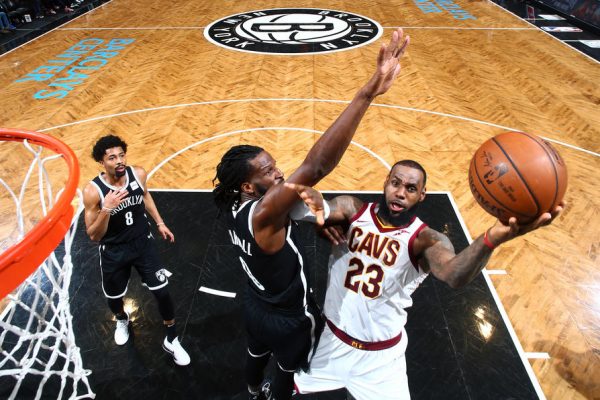 (Brooklyn, NY) — Led by 37 points from LeBron James, the Cleveland Cavaliers picked up their fifth consecutive victory as they defeated the Brooklyn Nets by a score of 121-114 at Barclays Center on Sunday afternoon. That effort by James came in spite of a combination of lack of sleep and the rare daytime start:

“I don’t know how I came away with my energy because I only got about three hours of sleep last night,” James said. “I’ve been a little bit under the weather and just couldn’t sleep last night and with the early game, kind of messed my routine up. But if I’m going to be active, I have to be active.”

Being forced to battle back for most of the game, the Cavaliers finally took the lead for good after a driving layup from George Hill with 5:58 left made it 101-100. Six more unanswered points followed and were part of a 17-6 surge that changed the momentum of the contest, giving the Cavs a 116-106 lead with 1:44 left. The Nets managed to twice slice that deficit in half, but a James 3-pointer and a pair of free throws from Jordan Clarkson were enough to put the game away.

“This Brooklyn team has been real difficult for us all season,” Cavs assistant coach Larry Drew said. “I’m just glad we hung in there, we didn’t fold. I thought we did a much better job defensively in the second half that the first.”

James added 10 rebounds and eight assists to his totals, joining Kevin Love with double-doubles on the day. Love scored 20 and also grabbed 15 boards, with Hill tossing in 17 points. Two key players off the bench for Cleveland were Clarkson with 18 points and Rodney Hood with 16. Tristan Thompson also cleaned 10 boards off the glass.

“Guys got multiple stops and executed offensively,” James said immediately after the game about the fourth-quarter success.

Clarkson also cited the defensive effort in the fourth as a key to the win:

“Everybody stayed aggressive and we got stops,” Clarkson said. “Everyone was talking and communicating.

Love liked the clutch nature of the victory:

“We made big plays when we needed to and were resilient down the stretch, like being scrappy on 50-50 balls,” Love said.

Hood was especially effective during the crucial fourth quarter, scoring nine points and showing no signs of the back issues that he’s dealt with over the past few weeks.

“It was hard the first 10-12 games I was here. My aggression level had to come up,” Hood said. “They want me to demand the ball more and I did that a few times today.”

The opening moments of the game saw the Cavaliers miss their first seven shots from the field, which resulted in an early 6-0 deficit. Separate runs of 9-2 and 8-0, respectively, by the Cavs appeared to put them in position of the game. However, in each instance, the Nets battled back to either tie the game or again take the lead. When the quarter ended, Brooklyn held a 30-28 advantage.

“We knew this game was going to be tough because Brooklyn’s a team that just keeps coming at you,” Hill said.

Despite collecting seven offensive rebounds during the first half, the Cavaliers had major problems defending from beyond the arc. The Nets hit for 10 3-pointers during the opening two quarters, which helped them take a pair of seven-point leads in the second. Following a 13-3 run by Cleveland that gave them a 55-52, Brooklyn went on a 10-2 run before Hill’s buzzer-beating long-range shot sliced the hosts’ lead to 62-60 at the break.

Another cold start when play resumed saw the Cavs make just 3-of-10 from the field in the first six minutes, which helped increase the Nets’ lead to nine at 80-71. Then, in just 53 seconds, the Cavaliers chopped their deficit to two with seven unanswered points. By the time the period had ended, that two-point margin remained, with Brooklyn holding an 89-87 lead.

“We were getting caught flat-footed,” James said about the Cavs’ defensive issues. “We need to be aware of being in a defensive stance.”

The Cavaliers were without the services of veteran Jeff Green, who sat out the game because of the flu.

“Sometimes wins can be ugly and this win was ugly,” Drew said.

The Cavaliers continue their three-game road swing with their only visit of the regular season to Miami. That game against the Heat will get underway at just after 8 p.m.