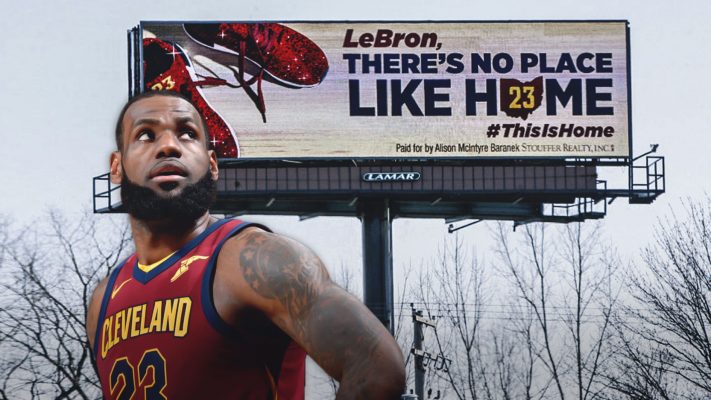 The recruitment of Cleveland Cavaliers forward LeBron James, a likely free agent in July, has thus far been confined to individual cities or fans taking it upon themselves to pay for billboards that beg James to join their respective teams. Billboards promoting Philadelphia as a destination appeared when the 76ers last appeared in Cleveland, while one in Los Angeles appeared when the Cavaliers played there earlier this month.

Now, one in James’ hometown of Akron has appeared and hasn’t escaped his notice:

The battle of the billboards continues for LeBron James. (via @AlisonMBaranek) pic.twitter.com/z3q8VsjvJj

LeBron says he’s flattered by the new billboards in Akron reminding him “there’s no place like home.”#Cavs

LeBron says he’s able to block out any distractions by focusing on bigger picture. Billboards are cool, but won’t knock him off path. pic.twitter.com/43MoqApAZ8

“I haven’t seen it,” James said. “But, like I said before, it’s very flattering. It’s just, I don’t know, it’s very humbling. I know my hometown, so, I already know there’s no place like Akron, that’s for sure. Me just having everything I’ve done with that city, obviously, but just being a part of that city my whole life … it’s just very flattering.”

Individual teams are forbidden from trying to officially recruit James right now, with the 15-year veteran having given no direct indication that he plans on leaving. That doesn’t mean that he won’t end up going elsewhere, something Cleveland fans rudely discovered eight years ago, but it does mean that the popularity of this form of recruitment will likely continue until James comes to a final decision.