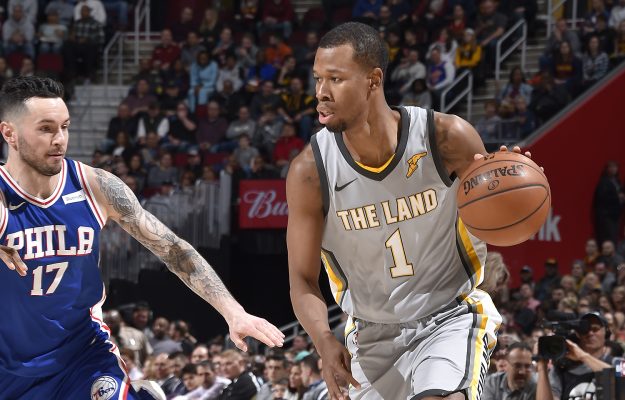 (Cleveland, OH) — Despite a determined fourth-quarter rally that got them within a single point with 2:25 left, the Cleveland Cavaliers couldn’t complete their comeback and fell 108-97 to the Philadelphia 76ers at Quicken Loans Arena on Thursday night. Cleveland never led in the game and saw its 11-game winning streak against Philadelphia come to an end.

Trailing by six to start the final quarter, the Cavs watched the 76ers run off the first seven points of the period to take their largest lead of the contest at 84-71 with 9:07 left in the game. That was when the Cavaliers began a 14-3 run over the next four minutes to slice the margin to two points.

Philly answered by scoring seven of the next nine points, only to see Cleveland virtually match it with a 7-1 run that made it 95-94, capped by Kyle Korver‘s long-range bomb. However, that would be it for the Cavs, who were outscored 8-1 the rest of the way.

“We were right there, down by one, but one breakdown by us and they get a three,” LeBron James said. “You can look at that and say, ‘Yeah, we’re where we want to be,’ but we’ve gotta clean some things up.”

That slow start to the fourth quarter was a continuation of shooting woes after the break that during the first 15 minutes of second-half action saw the Cavaliers shoot just 26 percent from the field. While they managed to connect at a 50 percent rate (8-of-16) in that department after that brutal stretch, it wasn’t enough, finishing the game shooting 41 percent from the field.

“Offensively, we just played and thought too much,” Cleveland head coach Tyronn Lue said after the game. “They’re not playing with speed, not playing with pace. We’ve got to get past that.”

James once again paced the Cavs, scoring 30 points, grabbing nine rebounds and dishing out eight assists. Three of the team’s newcomers were the only other Cavaliers to also reach double-figures in scoring: Larry Nance Jr. scored 13 and grabbed seven rebounds, Rodney Hood tallied 11 and had five rebounds and assists each. Jordan Clarkson rounded out the trio with 10 points and four assists before being ejected in the closing seconds after throwing the ball at the Sixers’ Dario Saric.

The Cavaliers quickly fell behind to start the game, trailing 11-4 and by as many as eight points. The 76ers made the most of their field-goal attempts for much of the quarter, connecting on 10-of 15 (67 percent) from the field to start the game, before missing 3-of-4 to close out the period. Five of those baskets came from long-range and helped give them a 32-29 lead after the first 12 minutes.

While the Cavs managed to tie the game twice in the early stages of the second, they could never take the lead and eventually saw the Sixers build their lead to 10 points at 57-47. Both teams cooled off from the field in the period, shooting less than 50 percent, with Philadelphia maintaining that three-point advantage at intermission by a score of 59-56.

Another slow start by the Cavaliers when play resumed was the result of the aforementioned weak shooting from the field, which plagued them throughout the period. They finished those 12 minutes by hitting just 32 percent of their shots from the field, which helped the Sixers maintain their lead over the course of the quarter. Leading by as many as nine points at one point, Philly took a 77-71 advantage into that final quarter.

“Getting consecutive defensive stops,” Nance said about what the Cavaliers were lacking for the night. “They were just making big and timely shots all night.”

The Cavaliers played without the services of J.R. Smith, who was suspended on Thursday afternoon for detrimental conduct.

“The effort and intensity were there,” Lue said. “We’re just playing too slow in the half court.”

The Cavaliers next play on Saturday night when they continue their homestand with a game against the Denver Nuggets. That contest will tip off at just after 7:30 p.m. ET.