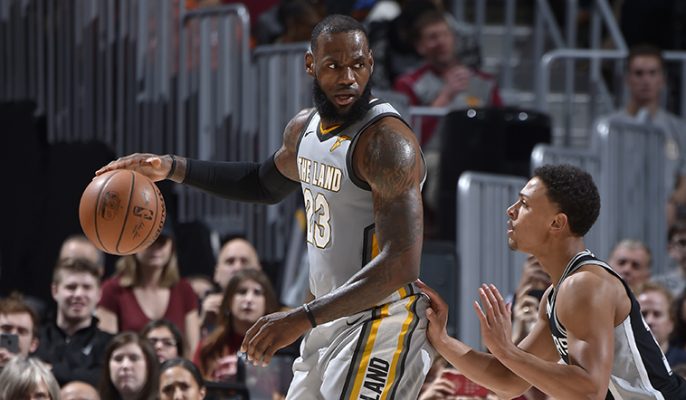 Following the Cleveland Cavaliers‘ recent loss to the San Antonio Spurs, James spoke with reporters about a lack of foul calls during the game. The four-time MVP put up just four free-throw attempts, despite shooting the ball 25 times.

LeBron was frustrated with the officiating in today's game. #Cavs pic.twitter.com/tT817YD7tM

“We’re at a point now where we protect the shooter more than the driver,” James said following the game. “There’s no reason I should be going to the line four times in a game when I drive 100 times to the paint. I’m getting hit, slapped, grabbed, whatever.

James may have a point when it comes to a lack of favorable calls. Despite being eighth in the league in field-goal attempts per game, he is just 14th in terms of free-throw attempts.

As for his claim that the league has put an emphasis on protecting shooters, it’s interesting to note that the players who most regularly get sent to the line seem to poke a hole in James’ assertion. Three players in the top five are big men who do most of their scoring in the paint. Giannis Antetokounmpo who, like James, loves to drive to the rim also appears on the list. Only one player, James Harden, can truly be considered a shooter. Given those numbers, it seems inside scorers get their fair share of calls. Still, there is no denying that there have been several occasions this season when James has seemed to deserve a foul that wasn’t called.

It will be interesting to see if James’ comments have an impact going forward. Unfortunately for him, it isn’t likely to change what the four-time MVP clearly sees as a disturbing trend.