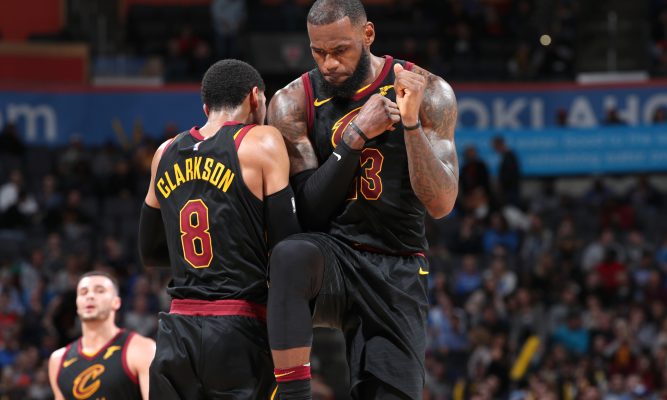 So much has changed for the Cleveland Cavaliers since the trade deadline. The drama-filled storylines about the demise of the defending Eastern Conference champions from three weeks ago have been replaced by optimism from almost all media outlets.

Winning has a lot to do with it.

The Cavaliers have won five of their last six games and three of their last four since George Hill, Jordan Clarkson, Rodney Hood, and Larry Nance Jr. joined the team after the blockbuster trade deadline deals.

What has changed? Other than the fact that the eye test shows the Cavs being more energetic and athletic, they have improved dramatically in at least one particular category: defense.

According to NBA.com’s advanced stats, the Cavaliers are fifth in defensive rating with 101.2 in the past four games. They are surpassed only by the Utah Jazz (97.8), Golden State Warriors (98.2), Indiana Pacers (98.5), and Charlotte Hornets (100.4) over the same number of games played recently.

That’s a far cry from the team’s previous defensive rating in which they were 29th in the league. If not for the defensive ineptitude of the Sacramento Kings, the Cavs would have been in last place.

Primarily because of Hill and Nance, the Wine and Gold have made a lot of progress defensively and team leader LeBron James is one of those who has noticed. After the Cavs’ 112-89 win versus the Memphis Grizzlies Friday night, James spoke about the value of his new teammates.

“Obviously G. Hill’s hands, Larry’s length and athleticism allows us to kind of keep everything at bay,” James said. “Our league is all pick-and-roll. So when you’ve got a point guard and a center that can play two on two and the other three can kind of stay at bay, it helps out everybody.”

Nance learned a thing or two about the rule of verticality from one of his former teammates with the Los Angeles Lakers.

“My first year, I played with Roy Hibbert.” Nance said. “So, the Godfather of Verticality — ‘The Hibbert Rule.’ So, he showed me that a little bit and we worked on it a little bit in L.A.”

The numbers don’t lie: The new Cavaliers are now one of the best teams in the NBA.