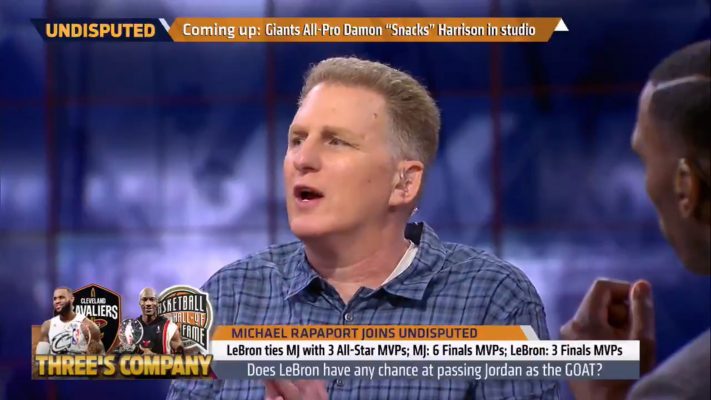 Actor Michael Rapaport is one of the biggest LeBron James haters you will ever get to know and he is not gun-shy about it. So when he was invited to FS1’s “Undisputed,” to compare Michael Jordan and James, you already know whose side he took (Jordan’s, of course).

Pairing him with another James hater in Skip Bayless spelled doom from the beginning for Shannon Sharpe. Sharpe believes James is the greatest NBA player ever, making him the perfect foil to Bayless.

"The only thing that LeBron James could truly catch with Michael Jordan, at this point, is his hairline." — @MichaelRapaport pic.twitter.com/VBcC1LAyNG

Rapaport, just like Bayless, believes that Jordan’s 6-0 Finals record makes him untouchable. Though he doesn’t mention it, he knows that James has a 3-5 record and this makes it difficult for him to be swayed otherwise. And he also doesn’t believe that James and the Cleveland Cavaliers will be able to win the championship this season.

In Rapaport’s mind, the only thing that James can catch in terms of Jordan’s legacy is his hairline.

Bayless brought up, as he always does on a regular basis, James’ 2011 Finals performance as an argument against the Cavaliers superstar ever surpassing Jordan as the greatest ever. To him, the four-time MVP’s record is forever tainted by that six-game series in which he underperformed.

In fairness to Rapaport, he acknowledges from the very beginning that James is the greatest player of his generation.

As a matter of fact, in an interview with CBS Sports Radio, he said that the Cavaliers superstar could still be the second greatest player ever. But in terms of catching up to Jordan as the greatest in the sport? He thinks that ship has sailed.

“There’s no argument of how great he is as a basketball player,” Rapaport said. “Michael Jordan is No. 1, period. Kobe [Bryant] might be No. 2. Magic Johnson might be No. 2. It could be LeBron James.”

Catching up to Jordan as the greatest ever is always a subject matter that elicits plenty of emotional responses from fans. It’s an argument that can only be answered by King James himself with his play on the court this season and in the future.