Tyronn Lue Explains Why He Continues to Start J.R. Smith 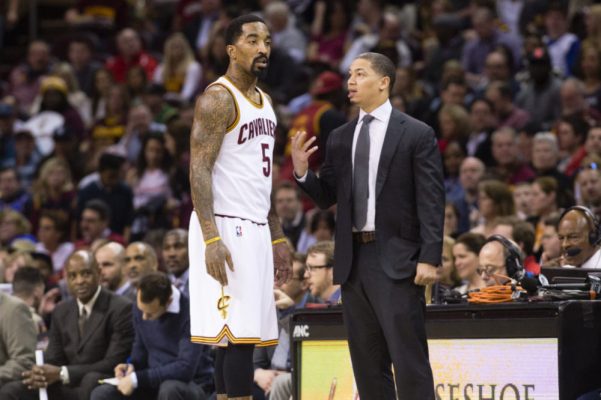 Shooting guard J.R. Smith had been struggling for much of this season, but Cleveland Cavaliers coach Tyronn Lue kept him in the starting lineup regardless.

From the Christmas Day loss versus the Golden State Warriors to the defeat at the hands of the lowly Orlando Magic, the Cavs had only won six of their last 19 games. Lue kept Smith as a starter even when he deserved to be benched.

He averaged a measly 7.6 points a game in January, shooting at a 31.7 percent clip from three-point range and 37.3 percent overall.

According to Cleveland.com’s Joe Vardon, Lue finally explained why he has continued to trust Smith even with the shooting guard going through a slump:

“If it wasn’t for JR in ’16 making those eight straight points coming out in the third quarter, we don’t win the championship. People saying quit on JR, give up on JR, it’s not right.”

In Game 7 of the 2016 NBA Finals with the Cavaliers down by seven at the beginning of the third quarter, Smith caught fire. He scored eight points including two straight 3-pointers that gave Cleveland the confidence boost it needed to gain some momentum.

By the time the final horn sounded, the Cavaliers were celebrating their first NBA championship.

Lue yanked Smith at the beginning of the season from his usual starting guard spot to make way for Dwyane Wade. He was reintroduced as a starter after three games when it was apparent that Wade worked best with the second unit.

Smith was given a long leash even though common sense dictated that someone else should have started in his place during the team’s mounting losses. The veteran guard eventually found his stroke.

“Sometimes your shot is going to come and go, that’s just part of the game. For the most part, his effort is there every night. That’s why I wanted to stick with JR and I don’t want to lose JR. Make sure keep him in good spirits, going in the right direction. He’s big for us. When he’s making shots, when he’s being aggressive, our team is a whole different team.”

If the Cavs wish to continue to play as well as they’ve been playing, they need him firing on all cylinders.

With his newfound confidence, don’t expect Smith to do anything less.