Video: Rodney Hood Looking Forward to Playing With ‘Best Player of Our Generation’ 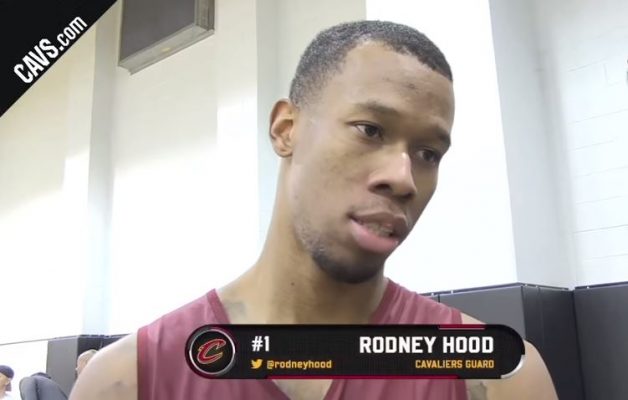 One of the four players added to the Cleveland Cavaliers roster on Thursday was former Utah Jazz guard Rodney Hood. During his first chance to practice with his new teammates, Hood offered insight into how he was told of the trade. He also expressed his excitement in joining the Cavaliers, most notably citing the chance to play with LeBron James.

“It means a lot, he’s the best player of our generation and I’ve been a big fan of his since I went to his camp and everything when I was in high school,” Hood said. “So to get a chance to play with him and learn from him, I think it will be a big booster for me.”

Hood also delved a little more deeply into his time at James’ camp:

“We went to his camp, you know, he plays against the kids when he’s at the camp,” Hood said. “So, I got a chance to see him. It was good, he runs a great camp. It was fun to go to.”

Asked how he did against James, Hood smiled sheepishly, but said he was grateful for the opportunity:

“Not too good, not too good,” Hood said. “But like I said, just to play against a guy like that, especially, it gives you a measure of where you at.”

At present, the 25-year-old Hood is in his fourth NBA season, having spent all of that time up to the trade as a member of the Jazz. The 6-foot-8 shooting guard comes to Cleveland averaging 16.8 points per game, and after having sat out Friday night’s game against Atlanta, he’ll make his Cavaliers debut against the Boston Celtics on Sunday.