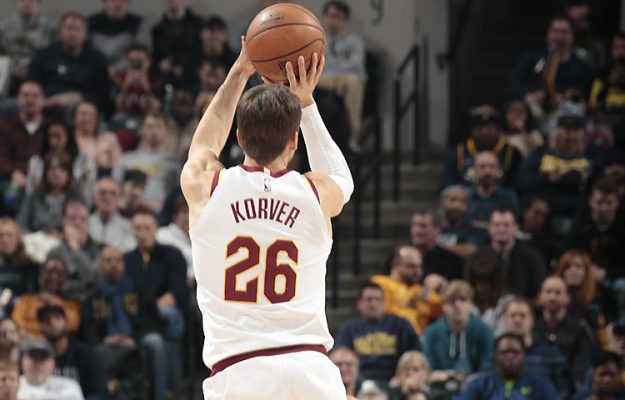 (Indianapolis, IN) — The Cleveland Cavaliers watched a 22-point first-quarter lead evaporate and suffered their third consecutive loss as they dropped a 97-95 decision to the Indiana Pacers at Bankers Life Fieldhouse on Friday night. The defeat marks their eighth loss in the last 11 games and seventh in the last nine contests.

LeBron James and Kevin Love led the Cavaliers, each picking up a double-double, with James scoring 27 points and handing out 11 assists, while also grabbing eight rebounds. Love chipped in with 21 points and hauled down 10 boards, with Jeff Green the only other Cavs player to score in double figures with 13 points off the bench.

Leading by 14 to start the second half, the Cavaliers watched the Pacers score the first 11 points of the third quarter to make it a 58-55 game. The Cavs appeared to weather the storm by going on a 14-5 run of their own, but then watched the Pacers again run off 11 straight points as part of a 16-2 run to close out the quarter.

“We had a lot of energy in the first half,” James said. “But we didn’t exert enough in the third quarter and they got back in the game.”

One of the downfalls of Cleveland during that quarter was their 32 percent shooting from the field, while their defense allowed Indiana to hit for five 3-pointers. Entering the final quarter, the Pacers held a 76-74 lead.

“Coming out in the third, we were just walking around. We didn’t really push, didn’t really attack,” Cavs head coach Tyronn Lue said. “I don’t know if it was fatigue, but we took ourselves out of it.”

The Cavaliers would come back to take a 95-89 lead with 3:57 to go in the game, but then watched the Pacers score the final eight points of the contest. Indiana took the lead for good on a 3-pointer from the top of the key by Victor Oladipo with 2:10 to play. The Pacers were then stopped on multiple chances to increase their lead, but the Cavaliers were unable to convert on any of those opportunities.

“We had a lot of good looks, but they just didn’t go down,” James said of those missed chances late in the game.

The final seconds of the game saw James step out of bounds on his way to a potential game-winning layup. That turned the ball back over to Indiana, which split a pair of free throws with 1.4 seconds remaining. A desperation shot by James at the buzzer then fell short.

“In the first quarter, we started out really good, but we knew it was going to be a tough game,” Cedi Osman, who scored eight points and grabbed five rebounds, said.

James was asked after the game if the Cavaliers’s first-quarter effort was a sign of progress, but he offered a blunt response in rebuttal:

The Cavaliers now return home, but face their archrivals on Monday night when the Golden State Warriors come to Quicken Loans Arena. Tipoff for that contest will be just after 8 p.m., with the game nationally broadcast on TNT.