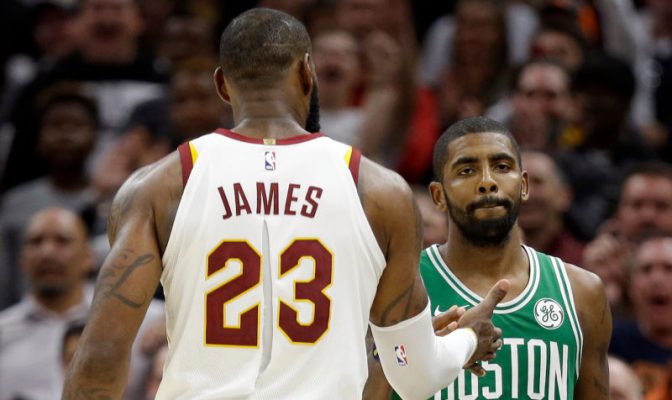 With the second 2017-18 contest between the Cleveland Cavaliers and Boston Celtics just hours away, the trade that sent Kyrie Irving to Boston this past summer has once again taken center stage.

Thanks to an in-depth article written by ESPN’s Jackie MacMullan, fans now have even better insight into what led up to Irving’s eventual departure from Cleveland, and what has taken place since then.

One of the most interesting revelations within the article is Irving revealing that he believed the Cavaliers did not value him within the organization. That they didn’t even want him.

MacMullen then wrote that Irving winced before continuing the sentiment.

“They didn’t want me there,” he said.

This seems hard to believe. Irving had become one of the top point guards in the league in Cleveland, and at only 25-years-old, the All-Star still had room to grow before truly hitting his prime. There’s very little logic to Irving’s assertion, and his former teammate LeBron James echoed that when he spoke with the sportswriter and television personality.

“Seven days later in Cleveland, James has just put the finishing touches on a win over Atlanta, the Cavaliers’ 15th victory in their past 16 games,” MacMullen wrote. “He conveys through the Cleveland public relations staff that he has already addressed Irving’s departure and will decline to answer questions regarding their relationship. Now, as he stands near his locker at Quicken Loans Arena, he’s asked about Irving’s contention that the Cavs didn’t want him.

“Asked to elaborate, James smiles politely, slings his bag over his shoulder and exits the arena.”

For James, Irving’s request to be traded from the Cavaliers may have been the first time in his life that a player would have rather played against him than alongside him.

Surely, many members of the Cleveland faithful share that sentiment.

The Celtics and the Cavaliers appear to be on a collision course to meet in the Eastern Conference Finals for the second year in a row. If that’s the case, Irving will finally get a chance to prove that he was right to want to blaze his own path in the NBA. James, on the other hand, will get the chance to prove that Irving was wrong to think it’s better to be against the King rather than with him.