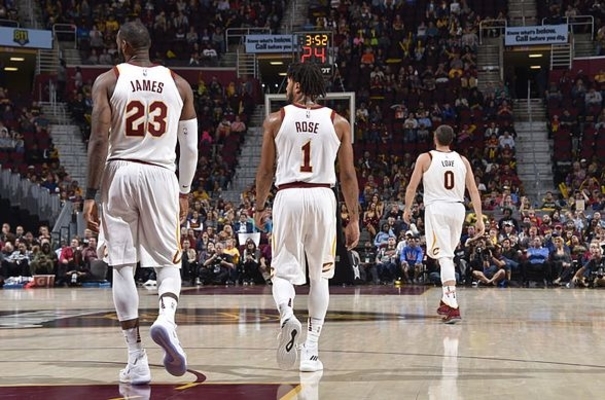 One of the great parts about being around three-time NBA champion LeBron James is constantly tasting success. James, who has been to seven straight NBA Finals, has brought a plethora of players to heights they could have never reached by themselves.

One perk that gets overlooked is simply learning from the four-time MVP. Cleveland Cavaliers guard Derrick Rose spoke to Marc J. Spears of the Undefeated about how studying is the best benefit of being around the King:

“When your [teammates] look better or the game looks easy because of how hard you work, that is greatness, I believe. A lot of people overlook that.”

There’s no doubt one can learn a tremendous amount from James. In his 15th year in the league, the forward is averaging 28.1 points, 9.1 assists and 8.1 rebounds. Rose, who has faced tons of injuries over the course of his career, has also been impressed with the way the veteran has conditioned his body:

“I am learning how to really be a champion by the way ’Bron takes care of his body and everything, how the team is close. That’s what it’s all about.”

Rose, 29, signed with the Cavs this season after playing a year with the New York Knicks. Although the point guard had a bigger role on the Knicks, playing for a championship and reviving his career to earn a lofty contract next summer was more appealing. The process has had its challenges as Rose has battled early-season injuries but it’s been a great learning experience.

“It would mean a lot. That is one of the reasons why I came here. I am in a different part of my career right now,” said Rose. “Right now, I am on a great team. I look forward to [being back playing] on this great team. I love the guys who are on the team. I am learning while I am here. It’s a learning experience.”

In just seven played games, the 2011 MVP is averaging a career low 14.3 points. However, the versatile guard did express how he is making progress towards a return soon:

“I think so. Like I said, it’s all about me taking my time. I can’t think about a due date or is this going to be the day. It’s about me making the most of my days, getting treatment and staying atop everything so I can return as soon as possible.”