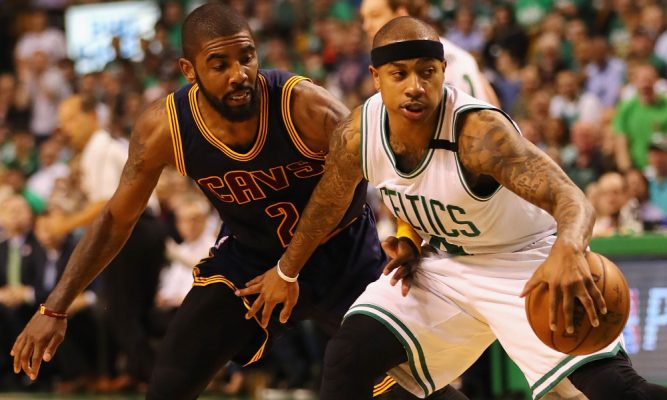 The debate over who might be the NBA’s biggest clutch player can offer a number of suggestions, most of them having some level of bias attached. In the opinion of injured Cleveland Cavaliers point guard Isaiah Thomas, the suggestion from one Boston-based writer that Boston Celtics point guard Kyrie Irving is now the king of clutch time was something to be dismissed.

Hahahaha I’m happy Kyrie playing well & they doing good. Don’t disrespect with the Isaiah who tho.. You knows damn well who I am and what I’ve done! https://t.co/5jD3qJRzVi

Thomas’ comments came in response to a tweet from a Cavaliers fan that had pointed out an article by ESPN’s Chris Forsberg. That article claims that Irving has supplanted Thomas when it comes to fourth-quarter heroics, less than a season after Thomas had been given the name, “King in the Fourth,” after his exploits helped the Celtics reach the NBA Eastern Conference Finals.

Currently rehabilitating an injured hip that allowed him to only play in the first two games of those conference finals, Thomas is looking to return to the court prior to the Cavaliers’ targeted deadline of January. Irving has helped the Celtics to a 16-3 start, which serves as a key reason for the high praise — even if less than 25 percent of the NBA regular season has been completed.