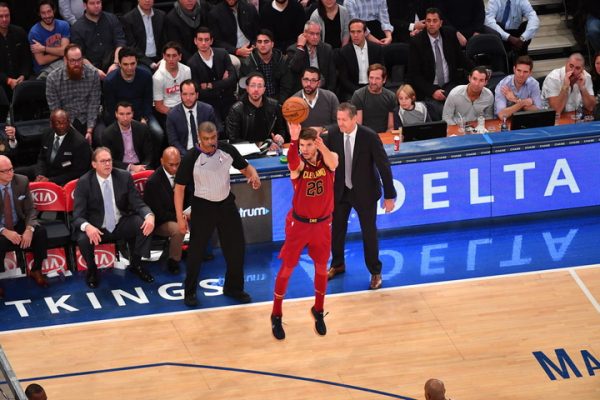 (New York, NY) — Coming back from a 23-point deficit over the final 14 minutes of action resulted in a stunning 104-101 victory for the Cleveland Cavaliers over the New York Knicks at Madison Square Garden on Monday night. Over that dramatic stretch, the Cavs outscored the Knicks 54-28, with Kyle Korver again proving to be Mr. Fourth Quarter by scoring 19 of his 21 points on the night during that period.

At halftime, the Cavaliers trailed by 16, but chopped that deficit down to seven during the first three minutes of the third period. After each team then scored a basket to make it 53-47, the Knicks went on a devastating 20-3 run, aided by poor shooting and eight turnovers by the Cavs. New York took its biggest lead of the game at 73-50 with 2:12 left in the third, though Cleveland managed to make it a 76-61 game by the time the period had ended.

Continuing to whittle the margin over the course of the first ten minutes of the fourth, the Cavaliers finally tied the game at 97 apiece on a 3-pointer by Channing Frye with 2:16 left. LeBron James then followed with another 3-pointer with 1:23 left to give the Cavs the lead for good at 100-97. Korver had connected on just 1-of-8 from long-range to start the game, but then hit on his last four attempts and also delivered at the foul line.

“We found some energy in the fourth quarter,” Korver said immediately after the game. “I think, really, we started hitting shots. I don’t know how many threes we hit in the first three quarters, but it felt like we couldn’t hit anything. In the fourth quarter, everybody stepped up, made some shots, got some stops. We just had fun.”

The comeback was largely forged by the 3-pointer, with the Cavaliers nailing nine long-range shots during that final period. That was in comparison to hitting just seven in 28 attempts during the first three quarters.

“I thought he was big, especially in the second half,” Lue said. “Making that big three was huge for us.”

The Cavaliers’ ability to get to the basket was also key, according to James:

“Just being aggressive and getting to the paint was huge and we were able to turn it around,” James said.

James led the Cavaliers with a double-double by tallying 23 points and dishing out 12 assists, with eight of the latter coming during the fourth quarter. Korver’s 21 points off the bench were joined by fellow reserve Dwyane Wade‘s 15 points, while Jae Crowder delivered another impressive night on offense by contributing 13 points.

Defense became a major fourth-quarter focus, according to James:

“We had to get stops because we were down by so much,” James said.

Lue spoke about what the overall bench effort that helped jump-start the comeback in the latter part of the third quarter did to help the team:

“Just seeing those guys come in and give us some encouragement,” Lue said. “Then when the first unit came back in, they were able to feed off those guys.”

The Cavaliers had early control during the first quarter, jumping out a 16-9 lead, but then watched the Knicks run off nine unanswered points to take the lead. Cleveland would outscore the Knicks 9-4 during the remainder of the period to hold a 25-22 advantage as the quarter ended.

During the first six minutes of the second quarter, both teams shot poorly. However, in the latter half of the period, the Knicks connected from the field at a 56 percent rate, compared to the Cavs’ 30 percent output. The end result was that New York went on a 17-2 run, with the last 15 points of that surge going unanswered by Cleveland. Four turnovers by the Cavaliers during this stretch were part of 12 during the half, which put them in a 51-35 hole at the break.

“I just thought early on, we were committing too many turnovers,” Lue said.

With 40.2 seconds left in that opening period, a pre-game controversy that had been brewing between the two teams erupted and resulted in technical fouls being assessed to both James and the Knicks’ Enes Kanter. James had just finished scoring on a dunk when he got involved in a mini scuffle with Knicks rookie guard Frank Ntilikina. In the midst of this situation, Kanter arrived and began jawing with James, forcing officials to step in and hand out the technicals.

The genesis of the controversy stemmed from postgame remarks made by James on Saturday night about how the Knicks should have drafted Dennis Smith Jr. instead of Ntilikina. Kanter later injected his own comments about James’ remarks, which James promptly dismissed during the Monday morning shootaround.

That level of animosity was also evident in Cavs guard J.R. Smith‘s postgame remarks. Smith was especially motivated to beat his former team, citing afterward what he felt about possibly losing when the Cavaliers were trailing by 23 points:

“Not to the Knicks,” Smith said. “I don’t mind losing, but this is one of those teams I don’t want to lose to, especially to get blown out like that.”

The Cavaliers will conclude their four-game road trip with a Wednesday night contest against the Charlotte Hornets that will tip off just after 8 p.m. ET. The game will be broadcast nationally by ESPN.