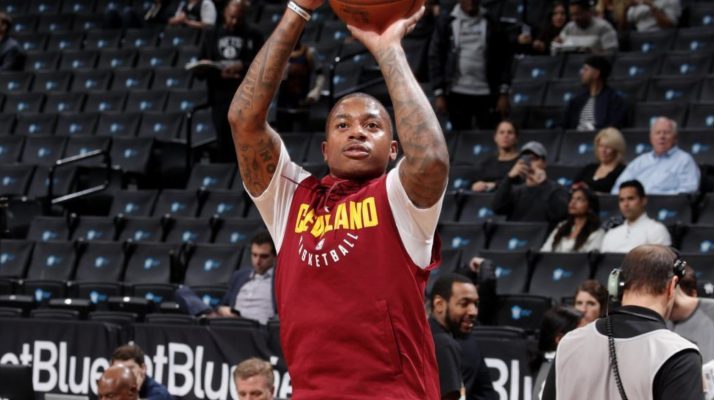 Cleveland Cavaliers point guard Isaiah Thomas has yet to take the court during the 2017-18 NBA season as he rehabilitates an injured hip. That absence from the lineup and the perception of his unfamiliarity with his new teammate LeBron James have led to concerns about their ability to quickly establish a winning chemistry that will benefit the Cavaliers.

According to Joe Vardon of Cleveland.com, Thomas isn’t at all worried about the speed at which such chemistry will be created:

“It’s definitely going to be an adjustment period but me being older, me knowing the game a little bit more and being a student of the game, I’m going to be able to adjust quicker than somebody else could,” Thomas said.

James has previously had some bumpy stretches trying to work with standout guards. In the early days of working with both Dwyane Wade with the Miami Heat and Kyrie Irving upon his return to the Cavaliers, some growing pains were clearly evident and reflected in the sluggish play of both teams. Ultimately, both partnerships worked out well enough to deliver NBA titles to each franchise.

Given that experience, James is more measured about how long it will take for the chemistry to surface:

“I don’t know. I think we’re both going to have to figure out how to get the most out of each other and be on the floor at the same time,” James said. “I haven’t played with the guy. I’ve never stepped out on the floor with Isaiah before. But I’ve played against him and I know what he’s capable of doing. So, we’ll have to see. … You can talk about that, but you don’t know until you get on the floor.”

Still, Thomas is confident that his presence can help the team bounce back from its 5-7 start:

“It’s been frustrating because I know where I can help at,” Thomas said. “Not just scoring and making plays, but, being that leader, being that voice out there and holding everybody accountable. Not saying that guys aren’t doing that, but I know where I can help at, in so many ways other than just scoring the basketball. And I think I could really put pressure on the defense.

“We don’t have nobody really who’s been able to get in the paint and make a play and keep the defense on their heels and get to the foul line and things like that, so I think there’s so many areas that I can help in and, I’m just, I’m impatient but I’ve got to be patient. I hope I’ll be out there real soon.”

Thomas also indicates that playing off the ball won’t require any major adjustment on his part:

“I mean, I had the ball a lot (last year with Boston) just because I had to have the ball,” Thomas said. “A lot of the times, seriously, last year in the playoffs I played off the ball. So I’m fine with that. I’m a scoring guard. Like, off the ball I can catch and shoot. I can do things like that, but I think, the more we get with each other I think it’s going to be an easier transition.”

James definitely sees parallels between Thomas and Irving that bode well for the team upon Thomas’ return:

“The one thing about both of them that I learned being with Kyrie and getting to know Isaiah is they’re fierce,” James said. “They’re fierce and they love to play ball. They’re gym rats, and when you’re a gym rat, that’s a great feeling.”

Aware that his performance will be measured up against Irving’s, Thomas noted that the team’s slow start is tied to his absence and adjusting to Irving’s departure:

“You lost a guy that was a big part of what they did here,” Thomas said. “What they won a championship with. We’re kind of the same type of player when it comes to scoring and making plays, and, they lost that. They’ve had that for three years and it’s tough to adjust to.

“I didn’t think it would be as tough as it is right now for us, but I mean, everybody goes through this at some point in the season,” Thomas continued. “I’m glad we’re going through it now to figure it out early and hopefully it will be better later in the year.”

Thomas is expected to be ready to play in January, though more positive reports indicate that he might return to action by late next month. The Cavaliers are hoping that history repeats itself, since Irving returned to the court in December 2015 after suffering a fractured kneecap in the previous year’s Finals. Six months later, the Cavs were celebrating their first NBA title.