Video: LeBron James and John Wall Work Out Together in Miami 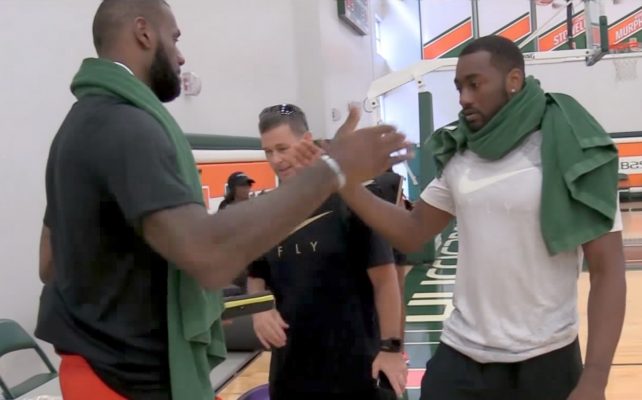 In episode five of Washington Wizards superstar John Wall’s “NO OFF SEASON,” he is joined by teammate Kelly Oubre Jr. and Cleveland Cavaliers superstar LeBron James, as the trio undergoes a workout led by NBA skills trainer Rob McClanaghan.

“I lock in a lot, but with a person like that, you just bring the competitive drive out,” said Wall of James. “He’s LeBron James. That’s a big brother to me. But every time I’m working with anybody like that, him, Kevin Durant, whoever I’m with, I wanna be better than them because whenever I step on the court I feel like I’m the best player no matter who you are. That’s just my mindset.”

During a sort of competitive shooting drill amongst the three, James can clearly be seen as the best shooter of the group, as the four-time MVP’s jumper has been looking sharp all offseason long.

“Yeah, he gonna talk a little junk, I talk junk and then it’s about competing. We wanna outshoot each other, we wanna do this and do that,” said Wall. “Come on man. He has championships, he has MVPs, he has stuff that I want to add to my accolades. So why not work with somebody like that and learn from him.”

There has been a kind of consensus in the NBA world that if James and Wall were to ever team up, they’d be the best one-two punch this league has seen in quite some time.