Report: Isaiah Thomas ‘Hurt’ by Trade to Cavs, Team Has ‘Relationship Mending’ to Do 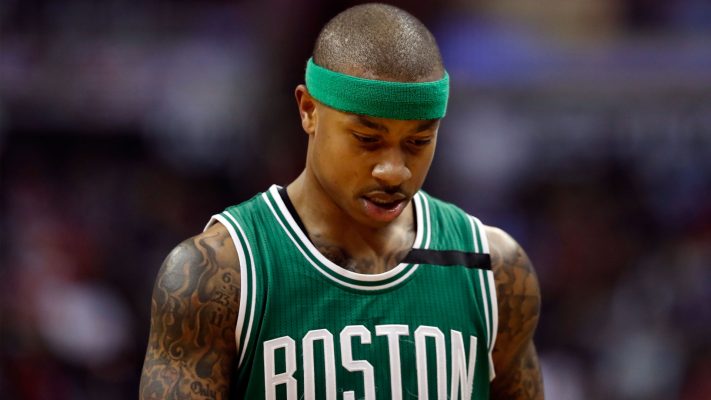 As the dust continues to settle on the Kyrie Irving–Isaiah Thomas trade between the Cleveland Cavaliers and Boston Celtics, some of the apparent raw emotions surrounding the deal are starting to surface. In this case, Thomas is apparently emotionally wounded by being dealt away from the team where he became a standout NBA player.

Thomas expressed those feelings to Hall of Fame guard Isiah Thomas, with the latter Thomas discussing the situation in Las Vegas on the MMA Hour.

“From a basketball standpoint, he and Kyrie Irving, this will be great for both of them,” Isiah Thomas said. “Both will do well. But it really was like a punch in the gut because it came out of nowhere. Kyrie was expecting a trade, he was prepared for it. And talking to Isaiah the other night, now he’s scrambling, trying to find out where his kids are going to go to school, trying to find a place to live. And it was just so unexpected for him.”

Isiah Thomas believes that the full impact of the deal will take the younger Thomas some time to absorb. The pace of dealing with the trade comes at a time when Isaiah Thomas will play this season as a player on the cusp of free agency, which could make it more difficult for the Cavs to reach an agreement next July.

“He said he gave his heart and soul to the Celtics,” Isiah Thomas said. “He gave them everything. It’s a business and we all understand that it’s a business, but to have it happen in such a way for him. I think it really hurt him. I think it’s going to be difficult for him to trust again, to give that trust, that loyalty, that love to another organization.

“And I definitely think the Cavs are going to have to do some relationship mending to get him back to the point where he loves being where he’s at. Because he’s a small guy and the thing that gets him over is his love and his passion. And if those things are kind of missing a little bit, it’s going to be hard.”

The Cavaliers’ training camp opens in roughly a month and the start of the regular season begins Oct. 17. While the lingering hip injury suffered by Thomas could potentially delay Thomas’ first official game in a Cleveland uniform, it’s apparent that the team will likely need to address the issue before that takes place in order to focus on reaching its fourth straight NBA Finals.