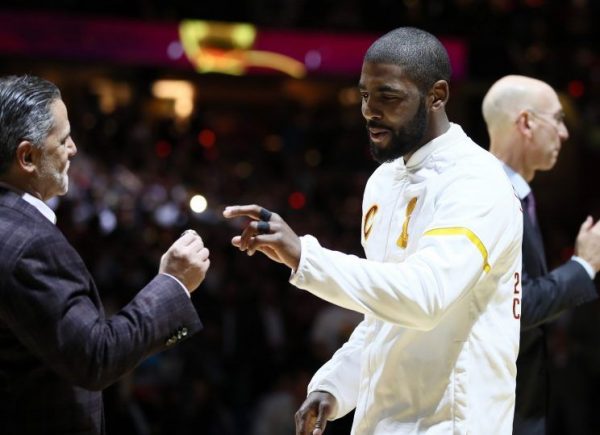 In the aftermath of the Kyrie Irving trade to the Boston Celtics, Cleveland Cavaliers owner Dan Gilbert took time to acknowledge the contributions of his now-former point guard. Irving was the first overall pick in the 2011 NBA Draft and leaves as a player who hit the most iconic basket in franchise history.

Joe Vardon of Cleveland.com noted that Gilbert’s comments were part of a media release that the Cavaliers sent out announcing the trade on Tuesday night.

“On behalf of the entire franchise, I want to thank Kyrie Irving for the six impressive years he spent in Cleveland wearing the Cavaliers uniform,” Gilbert said. “From the moment we won the 2011 NBA lottery that put us in position to draft Kyrie to the ‘The Shot’ that sealed our first NBA championship and all of the electrifying plays that made him a joy to watch, ‘excitement’ was always in the air when it came to Kyrie Irving. We wish him and his family well as he moves on to the next phase of his NBA career.”

The remarks are in stark contrast to the bitter and controversial comments Gilbert made in the wake of LeBron James‘ departure to the Miami Heat in 2010. However, the circumstances in the two situations are decidedly different. James left as a free agent, a move that turned the Cavs into a perennial lottery team, while Irving’s departure has provided the team with a replacement in Isaiah Thomas, a strong defender in Jae Crowder and two building blocks (Ante Zizic and Brooklyn’s top draft pick in 2018) for the future.

“This trade needed to include both players and assets that we felt strongly could help us continue to compete for championships and we believe it does,” Altman said. “We look forward to Isaiah, Jae and Ante joining us and also felt that the unprotected first-round pick in the deal was very important for us and our future as well.

Ironically, Thomas was the last player taken in that 2011 draft. That’s a snub that he’s never forgotten and something that will continue to fuel his competitive drive as he prepares to cash in as a free agent next July.