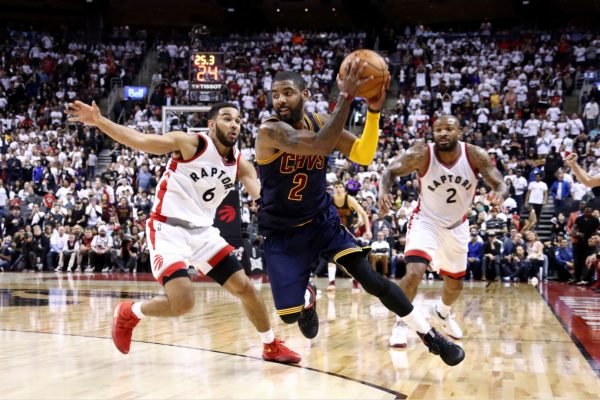 Any attempt to determine exactly where Cleveland Cavaliers point guard Kyrie Irving will end up if he’s traded continues to be difficult. That’s because the teams supposedly in the mix seem to keep changing, with the most recent entry one that few pundits likely would have predicted.

That would be the Toronto Raptors, whose general manager, Bobby Webster, recently appeared on TSN 1050 with co-hosts Michael Landsberg and Matt Cauz in Toronto. Webster indicated that the Raptors would be remiss if they ignored the opportunity to at least inquire about trading for a player of Irving’s caliber.

“We all do our due diligence,” Webster said. “Things don’t always make sense, but if they do, we’re always prepared. … A lot of talk that we do … doesn’t really see the light of day. … When a player like that becomes available, you’d be remiss not to call.”

The chief reason why such a move isn’t likely to end up taking place is the simple fact that the Raptors re-signed their own point guard, Kyle Lowry, last month to a three-year extension worth $100 million. In addition, the available personnel that Toronto might be able to offer the Cavaliers most likely wouldn’t entice Cavs general manager Koby Altman.

Cleveland has roughly six weeks to find a trading partner, since the prospect of bringing a disgruntled Irving to the team’s training camp isn’t really in the team’s best interest, especially as they look for ways to compete for a fourth straight trip to the NBA Finals.