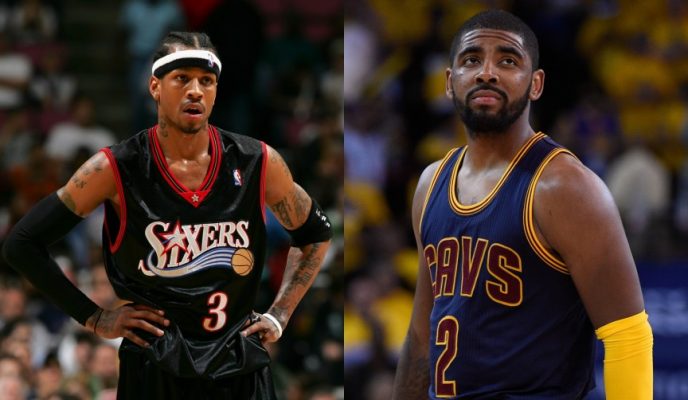 The play of Cleveland Cavaliers point guard Kyrie Irving has often been a subject of debate during his six-year career, but in the opinion of Golden State Warriors forward Kevin Durant, Irving’s ability surpasses that of Hall of Famer Allen Iverson.

Durant appeared on Bill Simmons’ podcast on Tuesday and offered his reasons (at the 37:07 mark) why he believes that Irving should rank ahead of Iverson, who entered the Basketball Hall of Fame last year.

Just moments earlier (35:03), Durant had made a point to emphasize Irving’s work ethic and how that played a key role in helping him reach elite status.

“I was telling some of my friends after Game 2, I was like, Kyrie, he just makes you happy when you watch him play,” Durant said. “You just smile when you watch him play because for somebody to be that skilled, you know he had to work tirelessly at it. The stuff he has in his package is next-level stuff that you can try to teach your kids to do it, but you’ll never be able to do it.

“I’ve never seen somebody block his layup, and he’s 6-2. I’ve never seen one person pin his layup on the glass—not one—because the spin he got on it and he don’t have to look at it. I just got so much respect for him because I know how much work he put in to be that good. I never seen nobody like him.

Durant was MVP for this year’s Finals in leading the Warriors to the league title. While Irving didn’t win the award last year when Cleveland defeated Golden State, it was his clutch 3-pointer with 52 seconds left in Game 7 that served as the game-winning points. Iverson only reached the Finals once, with his 2001 Philadelphia 76ers squad losing in five games to the Los Angeles Lakers.